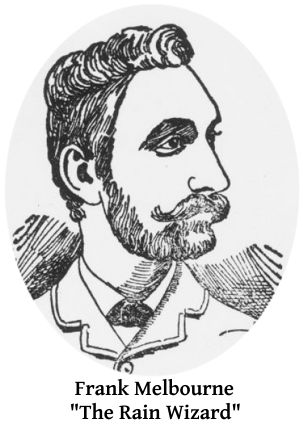 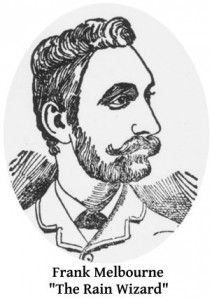 In the early 1890’s several men claiming to be rainmakers were making headlines — from explosive-laden balloons launched to blast rain from the sky (see Part One of the series) to the super-secret formulas Frank Melbourne, a.k.a., the “Rain Wizard”, claimed would produce copious amounts of rain in drought-stricken parts of the West and Midwest (see Part Two).

Frank Melbourne began broadening his horizons in 1892 and making plans for that year’s rainmaking wizardry.  In early January he was promising rain to farmers around the Rapids City, South Dakota area, for which he would charge ten cents per acre of coverage.  In late January Melbourne was on his way to the State of Sonora, Mexico where it hadn’t rained for about eight months.

The Mexican government was willing to pay his expenses, but wouldn’t grant further compensation until rain was produced.  By early March rain had indeed fallen at Hermosilla and Melbourne began negotiating another deal with the State of Chihuahua.   Meanwhile, back in the States rainmaking companies were sprouting up.  In February of 1892 the Goodland Artificial Rain Company filed its charter with the Kansas Secretary of State.  Melbourne would now have competition.

This article is no longer available for free at this site. It was re-written and enhanced, complete with footnotes and sources and has been published in the August 2018 issue of Digging History Magazine.  Should you prefer to purchase the article only, contact me for more information.