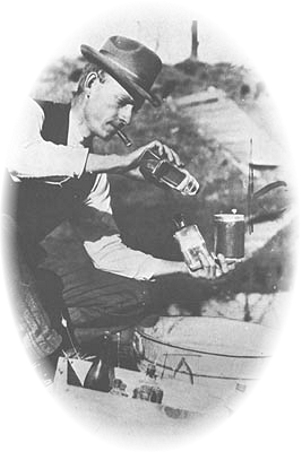 Frank Melbourne mysteriously disappeared, although he had long since been found to be a fraud.  (In case you missed previous articles, check out Part One, Part Two and Part Three of this series.)  Yet, that didn’t stop other so-called rainmakers from attempting to make a buck.  The early twentieth century’s most famous rainmaker was called the “Moisture Accelerator”.

Charles Mallory Hatfield, aka the “Moisture Accelerator”, was born on July 15, 1875 in Fort Scott, Kansas and sometime in the 1880’s his family moved to southern California.  In 1894 they moved to San Diego County where his father bought a ranch.  As a young boy, Charles sold newspapers on the streets of the city.

Although Hatfield was later employed as a sewing machine salesman, he also studied “pluviculture” – rainmaking – in an attempt to create his own secret formula.  By 1902 he had a formula of twenty-three chemicals which actually produced a bit of drizzle at his father’s farm located in the San Diego area.

This article is no longer available for free at this site. It was re-written and enhanced, complete with footnotes and sources and has been published in the September 2018 issue of Digging History Magazine.  Should you prefer to purchase the article only, contact me for more information.