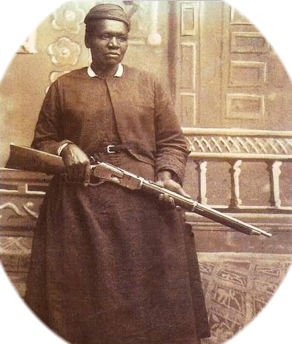 Mary Fields, a.k.a. “Stagecoach Mary” was born in Tennessee as a slave.  Nothing much is known about her early life, except that she was orphaned and, unlike other slave children of that day, she learned to read and write.

One important person in her life would be Dolly Dunne, born as the fifth child of John and Ellen Dunne, Irish immigrants living in Akron, Ohio.  John Dunne, according to Ursuline Sisters of Great Falls, went to California in 1856 to join the gold rush.  However, Dolly and her older sister were left behind in Ohio at an Ursuline (order of nuns) boarding school.  Dolly formally entered the convent in 1861 and took her vows as an Ursuline nun on August 23, 1864 and was elevated to Mother Superior in 1872.

In my research, I found that the story of how Mary Fields became linked to the Dunne family varies. Some have Mary being born near the time of Dolly’s birth and the two growing up together. Dolly was born on July 2, 1846 in Akron, Ohio, and according to most sources, Mary was born in approximately 1832 – so that doesn’t seem too credible. Some say Mary worked for Dolly’s brother, Judge Edmund Dunne, and that’s how they were acquainted. It does, at least, appear that sometime during the 1870’s Mary was in Ohio and perhaps worked for Mother Mary Amadeus, a.k.a. Dolly Dunne.

In 1881 Mother Amadeus departed for Montana Territory to establish schools for Indian children. She established schools and a convent, and in 1884 a girls mission school was opened near Cascade, Montana. She became seriously ill in 1885 with pneumonia and was nursed back to health by Mary Fields, who traveled from Ohio to Montana to assist her friend.

Mary Fields, by all accounts, cut an imposing figure. She was at least six feet tall and weighed about two hundred pounds. Mary also had a penchant for smoking cigars, having a pistol strapped under her apron and having a jug of whiskey nearby, according to Extraordinary Women of the American West by Judy Alter. Actor Gary Cooper and his family lived in Helena, Montana and he remembered seeing Mary when they visited Cascade when he was about nine years old. 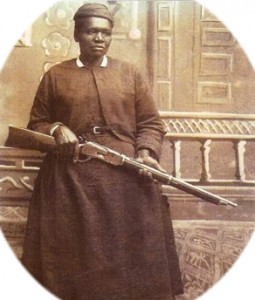 The school buildings were in a state of disrepair, so after nursing her friend back to health Mary decided to stay and help – hauling freight, doing laundry, gardening and even supervising the repair of the buildings as a forewoman. According to an article written by Gary Cooper (as the story was told to Marc Crawford) in the October 1959 issue of Ebony Magazine, Mary celebrated her birthday twice each year because she was not certain when exactly she was born. Cooper verified her thirst for hard liquor – citing a historical fact that one of the early mayors of Cascade, D.W. Monroe, made an exception and gave Mary the special privilege of being allowed to enter the saloons and drink with the men. Charlie Russell, renowned western artist, memorialized her with a pen and ink drawing that was displayed in the Cascade Bank.

Mary Fields, as you can imagine, was quite a character. According to the Ebony article, Mary not only worked to repair the school but she also handled the job of hauling supplies, often driving through the night in storms and certainly fraught with danger. On one trip a blizzard had overtaken her and when she was unable to see the road she had to stop, but throughout the night she walked back and forth to keep from freezing to death.

Mary was known to have a terrible temper, and mixed it up with the men who worked for her (who, no doubt, resented the fact that a woman – a black one at that – was their boss). At one point the situation escalated to an incident involving gun play with one of her subordinates. Complaints were brought to the bishop, who subsequently ordered the nuns to send her away. Mother Amadeus came to her rescue when she helped Mary open a restaurant, but Mary was too soft-hearted. Sheep herders in the winter were fed even if they couldn’t pay, promising to pay her by summer – which they never did. Mary’s restaurant business failed.

Undaunted, Mother Amadeus contacted government officials (perhaps without the bishop’s knowledge) and asked to have Mary assigned a mail route. Probably to the bishop’s dismay when he found out, Mary was assigned the route from Cascade to the school! According to Cooper’s article, every morning she “made her triumphant entry into the mission seated on top of the mail coach dressed in a man’s hat and coat and smoking a huge cigar.”

Mary executed her duties faithfully for eight years and she had rightfully earned her nickname “Stagecoach Mary”. Again, according to Cooper’s article, one day Mary was thrown from her coach and was injured. When she arrived at the mission the sisters encouraged her to return to the faith that she had, for the most part, abandoned when expelled from the mission. So, Mary confessed her sins and returned the next morning wearing a dress with a white veil that the sisters had made for her (usually she wore men’s clothes). High Mass was celebrated – Mary had returned to God!

Mother Amadeus was assigned to a mission in Alaska in 1903, and after her injury Mary no longer delivered the mail. She began doing laundry even though by then she was around seventy years old. Cooper shared one more humorous anecdote – Mary was sitting one day in the saloon when a customer passed by who owed her two dollars. She followed the gentleman outside, grabbed him by the shirt collar, knocked him down and demanded payment. When she returned to the saloon, she remarked, “His laundry bill is paid.”

In 1912 her laundry was destroyed by fire and the townspeople helped her rebuild her home, providing lumber and labor. In 1910 a proprietor of the New Cascade Hotel had arranged that Mary receive all her meals for free at the hotel. She also served as mascot for the local baseball team. Mary never married and never really smoothed out her “rough edges”, but when she died the town mourned her – she was one of a kind for sure, and a feisty one at that!