Wild West Wednesday: Olive the Tattooed Woman (her narrative was of painful interest) 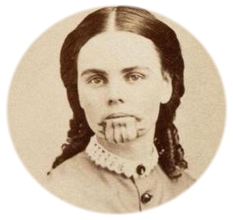 Her story was sensationalized in 1857 by a Methodist minister named Royal B. Stratton, who used what the Arizona Republic called “purple prose” to exaggerate and fabricate the experiences of young Olive Oatman.  As the Republic pointed out, there was no need for such fabrication because her actual experiences were more than harrowing enough.

Olive Ann Oatman was born in Illinois in 1837 to parents Roys and Mary Ann Oatman.  Her family, members of the Church of Latter Day Saints, decided to migrate west.  In 1850 Royce and Mary Ann and their seven children departed from Independence, Missouri in a caravan led by James Colin Brewster.

Brewster had fallen out of favor with the LDS church after claiming himself a prophet after been visited by the Angel Moronit. Following Joseph Smith’s death in 1844, Brewster sought to become the new leader and he and Hazen Aldrich co-founded what they called the Church of Christ, the successor to Smith’s own Church of Christ. His followers were called “Brewsterites.”

The Oatman family was among his followers who, instead of heading to Utah where most Mormons at that time were migrating, were headed to a place Brewster called “Bashan” beyond the Rio Grande Valley. At some point, however, disagreements arose and more than half of the caravan split off from the group.

According to Brian McGinty, author of The Oatman Massacre: A Tale of Desert Captivity and Survival, the parting of ways occurred on October 9, 1850 when Brewster and his followers headed over the Sangre de De Cristos toward Santa Fe and the others (Oatmans, Thompsons, Wilders, Meteers and Kellys) headed toward the Rio Grande Valley. The Oatman group crossed the Rio Grande ten days later, but along the way some of their animals were stolen by Indians.

In their minds, having crossed the Rio Grande, they were now west of the river and in an area Brewster had considered the “Land of Peace.” The Oatman group, however was still quite a distance from the “Land of Bashan” near where the Gila and Colorado Rivers met. After pausing for a three-day rest they traveled south and arrived in Socorro to replenish their supplies before continuing their journey on November 10. They soon arrived in unfriendly Apache territory only to have more livestock stolen.

The Brewster group had made their way south as well because in December of 1850 they were enumerated for that year’s census in Socorro, New Mexico Territory. J. Colin Brewster was listed as a “Mormon Prophet” but there are no census records for the Oatman family to be found in New Mexico or elsewhere.

The Oatman group made it to Tucson and decided to stop for awhile to regroup and repair their wagons, mend their clothes and stock up on supplies. Some families didn’t want to leave but Roys Oatman and Willard Wilder were anxious to continue their journey to Bashan. They were joined by Robert and John Kelly, two single men. It has been speculated that Olive and Robert were in love.

They were following a path along the Gila River, at that time the border between the United States and Mexico. On February 5, 1851 they arrived at the Pima Villages, “wearied, heart-sick, and nearly destitute.”

Unfortunately, the Pimas were no better off, having barely enough food to feed themselves after a severe drought. The emigrants continued toward the Maricopa villages and near there found a grassy place with water.

On February 7 Mrs. Wilder gave birth to “little Willard”. Roys Oatman, however, wasn’t in favor of pausing for long, so anxious was he to reach Bashan, and as McGinty wrote “attain the earthly Eden described by Colin Brewster in the prophecies of Esdras.” He had met up with an old acquaintance and was assured that the way west was safe, believing there was a United States Army fort on the Colorado.

Oatman’s decision to move on proved to be fatal, and in the end imprudent since his own wife was nearing childbirth. He could have remained for a time and waited for his own child to be born and Mrs. Wilder to recover from childbirth. Instead, he departed and again experienced difficulties along the trail. His friend Dr. Le Conte caught up with him and promised to take a letter requesting assistance to Fort Yuma.

Le Conte and his companion encountered their own difficulties when Indians stole their horses. His companion was sent ahead to deliver the letter and Le Conte followed later after posting a note on a tree so that the Oatmans would know what happened. Whether or not Roys found the doctor’s note or not, Lorenzo recalled that his father was quite dejected on the night of February 17 when they made camp.

They continued traveling the next day until the late afternoon when they stopped to eat. There was a full moon and Roys made the decision to travel through the night since it would be easier on the animals. Lorenzo and Olive recalled that Indians had come into their camp and asked for tobacco and a pipe which their father provided.

The Indians were interested in trading two horses (possibly the ones stolen from Le Conte and his companion) for food, but Roys ignored them and continued to load the wagon. All of a sudden the Indians let out a “deafening yell” and began attacking the family. Most of the family were killed except Olive, her sister Mary and brother Lorenzo who had been left for dead.

Olive later identified the attackers as Apaches but many believe they were more than likely Yavapai. The Indians left Lorenzo behind and took Olive and Mary as their slaves. Lorenzo was said to have escaped in the dark and picked up about forty miles from the massacre site by another group of emigrants. He was found with hat or shoes and covered with blood. After telling his story, the men set out to investigate the young boy’s claims.

They found the site where some of the bodies had been desecrated by coyotes and ascertained that the two young girls were missing. No one knew what had happened to them and the mystery remained for several years to come. Lorenzo had continued onto California and was living in Los Angeles when in 1856 word came that a young woman had been released at Fort Yuma by the Mohave Indians.

Olive and Mary had been enslaved by their captors and later traded, taken in by Mohave tribal leader Aespaneo and his family. The girls were given their own plots of land to farm and treated kindly, although it is unclear whether they were actually adopted into the family. Olive would later claim that she and Mary were afraid to leave.

Nevertheless, the girls were subjected to at least one tribal ritual. Thought to have been a ritual which assured a good afterlife, Olive and Mary were tattooed on their chins and arms. The exact date is unclear, but likely sometime in 1855 Mary died of starvation when a severe food shortage occurred.

Perhaps territorial authorities had been made aware of two young white girls living among the Mohaves because in 1855 negotiations were begun to have Olive released. At first the Mohaves resisted, perhaps grown fond of her or fearing retribution from the military. By the time she was released in 1856, Olive was nineteen years old. Years later her childhood friend Sarah Thompson speculated that Olive grieved after her return because she had married a Mohave man and birthed two boys.

Olive herself, however, denied such claims or that she had ever been mistreated in any way by either tribe – perhaps a case of “Stockholm Syndrome.” Before entering the fort she was provided appropriate clothing (at the time she was wearing only a skirt and nothing above the waist). Her most striking features were the tattoos. Her hair, originally a light golden color, had been dyed black. 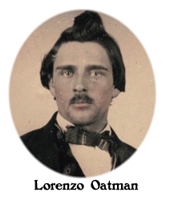 Soon after her release Olive discovered that Lorenzo had survived and they were reunited. Newspapers across the country prefaced their report with the words “The whole narrative is of painful interest.”

The following year Reverend Stratton wrote and published his book entitled Life Among the Indians. The book was one of very few ever published of such a horrific event, so it wasn’t surprising that it sold several thousand copies. Royalties were donated to Lorenzo and Olive for their education at the University of the Pacific.

In 1858 they moved to New York with Stratton and Olive traveled the lecture circuit to promote the book, one of the few occasions following her return to civilization when she appeared in public without a veil to hide her tattooed chin. For years rumors persisted that she hadn’t made the complete return to a “civilized life” and had died in an asylum. According to the Republic article, she did suffer from occasional headaches and bouts of depression and spent time at a Canadian spa.

Although Stratton had provided for Olive and Lorenzo, he had also exploited the family’s tragedy by exaggerating many facts. That was common for the era, however. Several books were written about Kit Carson, recounting fantastic tales of daring-do. Upon encountering one of those books, Carson remarked, “In camp was found a book, the first of the kind I had ever seen, in which I was made a great hero, slaying Indians by the hundreds.”

In 1865 Olive married cattleman John Brant Fairchild, living in Detroit for seven years before moving to Sherman, Texas where he was employed as president of the City Bank. It is said he later burned all of the copies of Life Among the Indians he could find. Fairchild made a fortune in banking and real estate and the couple adopted a daughter in 1876.

Olive championed the cause of orphaned children and always kept a staple food of the Mojaves, a jar of hazelnuts, as a reminder of her own plight. She died on March 20, 1903 and was buried in Sherman’s West Hill Cemetery.

Despite all the rumors she had gone mad and died in an asylum, Olive Oatman Fairchild lived a long and full life. On the other hand, Royal Stratton died in Hartford Connecticut in 1875 – in an insane asylum.