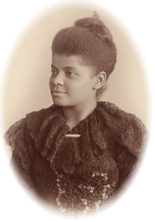 Ida Bell Wells was the oldest daughter of James and Lizzie Wells, born in slavery (temporarily) on July 16, 1862 in Holly Springs, Mississippi.  Less than six months later, all slaves were set free by Lincoln’s Emancipation Proclamation.  James was a master carpenter and Lizzie, a deeply religious woman, was a cook for the Bolling family.

Following the Civil War, Ida’s parents were both active in the Republican Party and James, as a member of the Freedmen’s Aid Society, helped to found Shaw University (now known as Rust College), a black liberal arts school in Holly Springs. Ida had been well-educated, but while away during the summer of 1878, her life changed drastically when a yellow fever epidemic swept through Holly Springs.

James and Lizzie and one of Ida’s siblings died, leaving Ida to care for her remaining siblings. She dropped out of school but eventually found a job as a teacher to support her family. In 1882 she and three of her youngest siblings moved to Memphis, Tennessee to be near other family members. Ida taught school and also continued her education at Fisk University.

Following in her father’s footsteps, Ida became an activist for civil rights, as well as a teacher, journalist, crusader against lynching and a suffragist. In 1884 an incident occurred on a Chesapeake & Ohio train to Nashville when she was asked by the conductor to give up her first-class seat for a white man. The practice of segregation had been outlawed with the 1875 Civil Rights Act, but railroads often skirted the law and segregated their passengers.

On principle, Ida refused to move to the so-called “Jim Crow” car – this incident occurring over seventy years before Rosa Parks refused to give up her bus seat. As the conductor attempted to forcibly remove her from her seat, Ida bit the man’s hand. She related the details in her autobiography:

I refused, saying that the forward car [closest to the locomotive] was a smoker, and as I was in the ladies’ car, I proposed to stay. . . [The conductor] tried to drag me out of the seat, but the moment he caught hold of my arm I fastened my teeth in the back of his hand. I had braced my feet against the seat in front and was holding to the back, and as he had already been badly bitten he didn’t try it again by himself. He went forward and got the baggageman and another man to help him and of course they succeeded in dragging me out.

Upon her return to Memphis, Ida employed an attorney, sued the railroad and won a $500 settlement – only to have it overturned by the Tennessee Supreme Court. Ida began to write articles which were published in various black newspapers and periodicals. She would later become the owner of the Memphis Free Speech and Headlight, a larger platform from which to advance the causes she was fighting for.

She openly criticized the Memphis school system for its lack of funding for poor schools and was dismissed by the Memphis school board in 1891. Thereafter, she became a full-time journalist and activist. In 1892 three black men had opened a grocery store in Memphis and became successful enough to begin drawing customers away from another store (white-owned) in the neighborhood. After a confrontation with whites, the three men were arrested and taken to jail, only to have the jail overrun and the three African-Americans lynched.

Ida’s efforts to outlaw lynching were met with anger by white Tennesseans, and the offices of the Free Speech were destroyed. Yet, Ida was undeterred by their threats and continued to campaign for anti-lynching laws (which were never passed). Ida had been traveling in the South researching the practice of lynching when her newspaper offices were destroyed. She received death threats warning her against returning to Memphis, but continued to travel and lecture, both at home and abroad, with her anti-lynching message.

In 1898 she led a protest in Washington, D.C., calling on President William McKinley to act. That same year she also married attorney Ferdinand L. Barnett of Chicago. They had four children together, but Ida struggled to balance her home and activist, eventually forcing her to curtail her travel and speaking schedules.

Even though she was never able to compel legislators to enact anti-lynching laws, she fought on. In 1896 she founded the National Association of Colored Women and in 1909 helped to found the National Association for the Advancement of Colored People (NAACP). She and Mary Church Terrell, another civil rights activist, were the only two women to sign the petition which led to the organization’s founding.

She joined the national suffragist movement, integrating it by refusing to remain at the rear of a 1913 march in Washington, D.C. In 1928 Ida began writing her autobiography, Crusade for Justice, but never finished the book – the book ended in the middle of a sentence and her daughter later edited and published it posthumously.

In her final year Ida was running for the Illinois State Senate and kept up a demanding and busy schedule. Even though she had been a tireless crusader most of her life, some of the last pages she wrote in her journal were filled with doubts about what she had accomplished during her lifetime: “All at once the realization came to me that I had nothing to show for all those years of toil and labor.”

Ida Bell Wells-Barnett died on March 25, 1931 of kidney failure, active until her last days. She had once said: “I felt that one had better die fighting against injustice than to die like a dog or a rat in a trap.”