Feisty Females: Alta Weiss (In a League All Her Own) 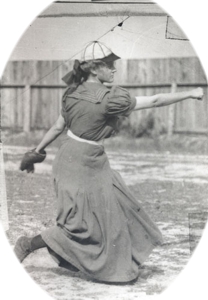 When she was scarcely one year old, her father claimed his daughter could throw a corn cob at a cat with the skill and precision of any pitcher in the big leagues.  Alta Weiss was born on February 9, 1890 in Berlin, Ohio to parents George and Lucinda Weiss and at the age of five she and her parents moved to Ragersville, Ohio where she came to be known as the town’s most famous resident.

At an early age her father encouraged her to keep playing, and by the time she was a teenager George had established a high school so that his “ace” daughter could play on the baseball team. He also built the Weiss Baseball Park in Ragersville. In 1907, while the family was vacationing in Vermilion, Ohio, she encountered some boys and offered to play catch with them. Little did they know what they would be witnessing – word of her skills as a pitcher spread.

According to the Baseball of Fame, after Alta struck out fifteen men the manager of Vermilion’s semi-pro team, the Independents, offered her a contract – she was seventeen years old. Each weekend she traveled to Vermilion from her home in Ragersville (127 miles) to pitch for the Independents. As one might imagine, she caused quite a stir and fans flocked to see her play. She was dubbed a “Girl Wonder.”

The Sandusky Star-Journal reported on September 18, 1907:

Miss Weiss is no masculine girl, no tomboy, although her youth might excuse that, especially in consideration of the adulation she has received at the hands of the Vermilion fans, who this summer have gone wild over her work. She is no Amazon. She is merely the daughter of Dr. Augustus [George] Weiss, of Ragersville, Tuscarawas county, O., where she has played baseball with her father and the “kids” ever since she was old enough to sit up and take notice.

She wore a blue serge skirt with a sailor blouse, a baseball cap, heavy black cotton stockings and rubber shoes. “She wears no corset. She said so.” The newspaper story noted that she didn’t throw like a girl, nor did she flinch when balls came her way. “She threw the ball as straight as an arrow and as fast, and when the catcher threw it back to her it was no girly-girly toss ball, but a hot liner which she caught.” She had never played ball with girls.

Not only was she a “ace pitcher” she was pretty good at bat too. Folks seemed to be in awe of the fact that she was still quite feminine in appearance and manner. “The only womanliness which she may have lost was in her corset. She advises that no one attempt to wear corsets and play baseball.” Indeed! This was reported on September 18, 1907. 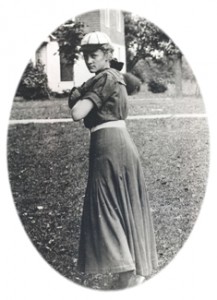 A week later the Sandusky Star-Journal was reporting that Alta would now suit up as a “real sure-enough ball player, clothes and all.” The day before Alta had ordered a baseball shirt, stockings, sweater, cap and spiked shoes. To complete the outfit she would wear bloomers and a short skirt, all made-to-order just for her. Her presence on the field continued to stir interest and by early October of 1907 the Humane Society was called upon to investigate whether she was of legal age (eighteen years old). Apparently nothing came of it because she continued to pitch and make headlines around the country.

Dr. Weiss was his daughter’s biggest fan and when the 1907 season ended he built Alta a gymnasium where she could train during the winter, aiming to be in the “best trim” possible when the season opened the following spring. Her goals for the next season included earning enough money to buy her own car. Her father saw her great potential, however, and decided to purchase a half-interest in the Vermilion Independents, whereupon he changed the name to the “Weiss All-Stars.” 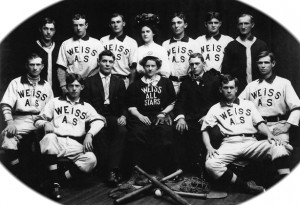 Alta, of course, was the star of the team and she was outfitted with a black uniform to set her apart from the white uniforms of her male team members. The team toured throughout Ohio, Kentucky, Indiana and Michigan, drawing large crowds wherever they went. It was customary for Alta to pitch five innings before taking a position at first base. This was occurring in the spring of 1908 while she was finishing her final year of high school. She was scheduled to graduate on June 6 but also scheduled to pitch in Dayton on June 7. The commencement date was moved up to May 21 to accommodate.

After the 1908 season Alta had earned enough money for college and enrolled in Wooster Academy. Her goal was to eventually become a doctor like her father and two years later she entered Starling College of Medicine. She still toured, however, and continued to earn money to put herself through school. 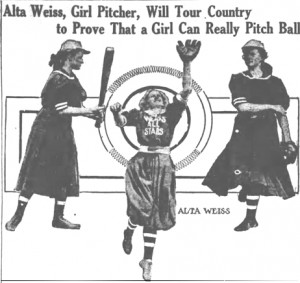 In 1914 Alta Weiss was the only female graduate of the Starling College of Medicine and played ball until her last game in 1922. In 1927 she married Johnny Hisrich of Ragersville. They lived in Norwalk, Ohio where she practiced medicine and he had an automotive garage. However, after twelve years of marriage the couple separated in 1939.

After her father died in 1946, Alta moved back to Ragersville to take over his practice. She retired after just a few years and was said to have become somewhat of a recluse – some say she spent her days sitting on her porch reading newspapers and watching the town kids play baseball.

Even after her retirement from baseball, newspaper articles would mention her name for years to come. Alta Weiss died on February 12, 1964, just three days following her seventy-fourth birthday. Her uniform was later sent to Cooperstown for a women’s baseball exhibit which opened in 2005.