This event which took place on January 24, 1876 might have been just an obscure piece of American Western history if not for the fact that it involved twenty-three year-old William Barclay “Bat” Masterson.  He was born on November 26 ,1853 and raised in Kansas.  His first job at the age of seventeen was working a Santa Fe Railroad construction job.  Bat was known to be handy with any gun he picked up, and when his employer failed to pay him he took a job as buffalo hunter.

After an Indian fight, he went to work as a civilian scout for General Nelson Appleton Miles.  His first assignment took him to a place in Texas called Sweetwater (first called “Hidetown” and later officially named Mobeetie).  At the time, it was a buffalo hunting camp on Sweetwater Creek, the north fork of the Red River.  Nearby was an United States Army outpost (later named Fort Elliott) where troops were assigned the duty of transforming Indian hunting grounds to an area suitable for settlement.

Masterson worked as a scout and teamster, hauling supplies in and out of northwest Indian territory (now Oklahoma). He also continued to work part-time as a buffalo hunter. The camp town of Sweetwater began to grow when businesses were opened – a restaurant, a boarding house, Chinese laundry, saloons and a dance hall. There was, however, no law enforcement. Charles Goodnight once said of Sweetwater (Mobeetie):

Mobeetie was patronized by outlaws, thieves, cut-throats, and buffalo hunters, with a large per cent of prostitutes. Taking it all, I think it was the hardest place I ever saw on the frontier except Cheyenne, Wyoming.

Masterson had arrived in Sweetwater in December of 1875 while hauling for the Army. On the night of January 24, 1876 he joined a poker game at the Lady Gay Saloon, playing with Harry Fleming, Jim Duffy and Corporal Melvin A. King. Also present that night were several of the dance hall girls who were enjoying a night off. One of the women, with a reputation as a prostitute as well, was named Mollie Brennan. She worked with several other women, including Kate Elder, a.k.a. “Big Nose Kate” and sometimes thought to be Mrs. John H. “Doc” Holliday (that’s a story for another article one of these days).

Melvin King had actually been born Anthony Cook in 1845. He enlisted in the 14th New York Heavy Artillery in October of 1863 and served until his regiment was captured on March 25, 1865. He was paroled on March 31 and by August he had been discharged from military service. On July 21, 1866 he enlisted in the 16th Infantry and was assigned to Reconstruction duty in Georgia. Considered a good soldier, he was somewhat of a troublemaker. Although court-martialed for “conduct prejudicial to good order and military discipline,” he was acquitted.

He was promoted to sergeant but his penchant for rowdiness earned him a reduction in rank, one year of hard labor and a pay forfeiture (although later reduced). After developing a drinking problem he was dishonorably discharged on August 24 ,1869 in Mobile, Alabama. From there he went to New Orleans and re-enlisted on October 28 in the 4th Cavalry as “Melvin A. King.” His regiment was transferred to the Texas frontier and later fought in the Red River War which began in 1874.

After his discharge in October of 1874, details are sketchy as to his whereabouts and activities. Some say he participated in raids on cow towns in the region. On April 29, 1875, however, he re-enlisted at Fort Richardson and rejoined his old company. He had been discharged the last time as a private but was promoted to corporal after re-enlistment and placed in charge of herding Indian ponies. In June he was re-assigned as Colonel Ranald Mackenzie’s orderly until October and then on to detached service in Sweetwater.

Eyewitnesses to the shootout said that King lost the poker game and left the Lady Gay rather disgruntled. After the game ended, Masterson chatted with Mollie and around midnight they and Charlie Norton (dance hall owner) walked over to the dance hall. Norton lit a lantern and Masterson and Mollie sat near the front door and continued talking. King had observed them entering the dance hall and knocked on the door.

When Masterson rose to answer the knock, King, drunk and perhaps still angry over his poker loss, burst into the run with a revolver. The details offered by various witnesses are different as to what actually happened next. It is believed that Mollie jumped in front of Masterson who was shot in the abdomen. Then King fired again and mortally wounded Mollie, and after Mollie was shot Masterson fired and mortally wounded King.

A young boy was sent to inform the camp commander, and soldiers and a surgeon were dispatched to the scene. Mollie had already died but the two men were examined and prepared for transport back to the military hospital. King died the next morning. Mollie Brennan is thought to have been the first, or one of the first, people buried in the Mobeetie Cemetery. After recovering from his wounds, Masterson headed home to Wichita to recover and then on to Dodge City, Kansas where he worked as a lawman alongside Wyatt Earp. 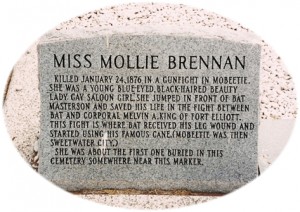 It is still unclear as to why King was so angry that night. Was he merely angry over his loss at the poker table? Some believe Bat and Mollie were romantically involved and King was jealous (perhaps he had at one point been romantically linked to her). Legends and theories abound but King was known to be mean, especially when he had been drinking. In 1881, Masterson would downplay the shootout by saying, “I had a little difficulty with some soldiers down there, but never mind, I dislike to talk about it.” Nevertheless, the “Sweetwater Shootout” just might have been where the legend of Bat Masterson was born (or maybe it was the television series which ran from 1958-1961). 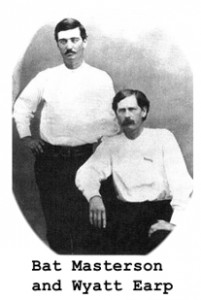