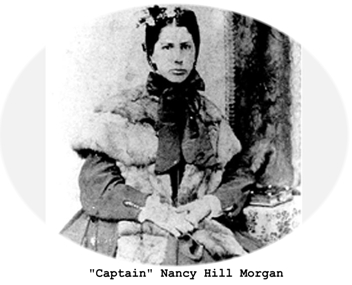 While their menfolk were off fighting the Union, many Southern women stepped up to defend their homes and families.  One group of females in LaGrange, Georgia, however, officially banded together and formed an all-female militia.  They called themselves the Nancy Harts in honor of Revolutionary War heroine and fellow Georgian Nancy Morgan Hart.  In case you missed my July 4 “Feisty Female” article on Nancy Morgan Hart, you can read it here.

After the LaGrange Light Guards of the Fourth Georgia Infantry left on April 26, 1861, two wives, Nancy Hill Morgan and Mary Alford Heard, decided to form their own all-female militia. About forty women attended the first meeting which was held at a schoolhouse on the grounds of United States Senator Benjamin Hill’s home. The women, inexperienced with both firearms and military procedures, secured the assistance of Dr. A.C. Ware, a local physician who had been exempted from military service, to assist them in their training. Dr. Ware was elected their first captain, according to Atlanta’s Southern Confederacy newspaper on June 1, 1861:

We are informed that the ladies of LaGrange, to the number of about forty organized themselves on Saturday last, into a military corps for the purpose of drilling and target practice. They elected Dr. A.C. Ware as their Captain, and, we believe, resolved to meet every Saturday.

Not long after the training began, Nancy Morgan and Mary Heard were elected as captain and first lieutenant, respectively. They were apparently quickly learning how to organize militarily – regiment leaders, sergeants, corporals and a treasurer were added. The “Nancy Harts” or “Nancies” began meeting twice as week to drill and train using William J. Hardee’s Rifle and Light Infantry Tactics. Years later a member of the Texas United Daughters of the Confederacy, Mrs. Forrest T. Morgan, reflected on what it might have been like:

I am sure this company presented a curious, odd, and singular spectacle as it met in Harris Grove, a beautiful and picturesque spot, with its magnificent trees to shelter them from the glare of light or sultry heat of the midsummer days, where they went often for target practice or drill…They met twice a week at the grove in the day, and at night on the courthouse square, with the moon and stars looking down with their majestic and glorious illumination to light the earth with their radiancy; while the captain could be heard in clear voice giving commands: “Shoulder arms, right face, forward, march!”

Prizes were offered as incentives to become better markswomen. There were several unfortunate incidents, but eventually they became expert and accurate shots.

The Nancy Harts continued to drill and train throughout the war, but even so the services they provided were mostly those of nurses to wounded soldiers, especially in the latter half of the war when LaGrange became a treatment center. Some patients were even sent to the women’s homes to receive individual care.

The Nancy Harts weren’t the only all-female militia group to organize during the Civil War, but likely the most diligent in terms of continuously drilling weekly for four years. With the exception of Sherman’s campaign on Atlanta which sent alarms throughout the area, LaGrange had remained mostly untouched by the war.

Near the end of the war, however, the women would indeed face the enemy. On April 17, 1865, in response to word of Union troops advancing toward LaGrange, the Nancy Harts marched to the grounds of LaGrange Female College to wait for the troops to arrive. When the Union cavalry arrived, Captain Nancy Morgan ordered the women to fall into a line of battle.

Perhaps alarmed at seeing a group of women rise to defend a town, a captured Confederate major stepped in to help negotiate the surrender of LaGrange to Colonel LaGrange (a coincidence his name was the same as the town’s). In return for their peaceful surrender, Colonel LaGrange agreed to spare private homes and land, although his troops did destroy facilities that were related to the Confederate war effort, such as the tannery and railroad. 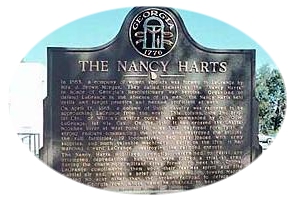 After the war the United Daughters of the Confederacy formed a LaGrange chapter, led by a former member of the Nancy Harts. As one would imagine, the Nancy Harts became a symbol of LaGrange civic pride in the ensuing years. The Ladies Home Journal published an article about them in 1904 and in 1957 a Georgia state historical marker was placed in front of the LaGrange courthouse. The Nancy Harts had but one actual encounter with the enemy on that day in April of 1865, but in the early 1900’s Mrs. Forrest T. Morgan would reflect:

Thus it was that the girl soldiers rendered the Southern cause valuable service. They were never called to field duty, it is true, but they stood ever in readiness and rendered a service equally effective as guards over the defenseless and their homes.