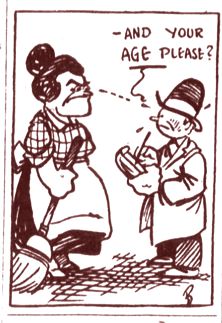 While many Americans are focused on COVID-19 and preventing its spread, it’s important to remember this is also a census year.  By now most of us have received mail and email notices about the opportunity to complete the short questionnaire online.  If you can do so, please fill it out — it’s important, as have been all the censuses taken since 1790. 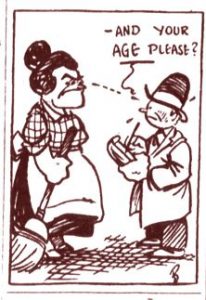 The current issue of Digging History Magazine is themed “Since it’s the census” with articles and anecdotal stories from the current publicly available censuses (1790-1940).  You might think these stories about a bunch of tick marks and statistics would be rather dry . . . and you would be wrong!  This issue of over 140 pages is packed with stories like these three from the 1930 census (God Bless the census takers!):

Those who plumb the earth for wealth of oil and gas fled from their riches here today when a giant and unconquered gusher imperiled lives and property, belching inflammable oil and gas for miles around.

A small army of oil workers, farmers, and nearby residents evacuated the area like refugees fleeing ravages of war.
Oil and gas, spewed by the gusher over and above every living thing, overwhelmed the section.
Guards and details of workmen, risking their lives against even the striking of a match in the danger zone, fought to prevent what could be disaster.

Oil was thrown like a dark waterspout high into the air. It fell in black blotches or in a malignant, smelly spray for miles around.

Since it happened on April 1, would their newfound wealth be enumerated? Perhaps not, as “one hundred wells, representing uncounted wealth, were halted in their wealth getting while men stood aghast by the thought of peril.”87
God bless census takers! They never knew what knocking on someone’s door would bring, especially (among other trying enumerator experiences) that of a Yiddish-speaking immigrant in Brooklyn :

The life of a census enumerator could hardly be termed a bed of roses. If you think it fun to pry into the secret lives of your neighbors around the corner, to find out when papa last worked and how old mama is, harken to the trials of an average census enumerator who stepped blithely forth at 10 o’clock this morning, to begin the big task of counting Uncle Sam’s children. . .

With her big yellow folder under her arm, Mrs. Hewitt set forth in the early morning breezes to canvass her route in the upper Bedford section. The first number on her list was the flat over a corner store, the family on the first floor was not at home. The mother and two little girls came out on the second floor landing. The mother spoke no English, but she fell on the neck of the census enumerator. She mumbled something to one of the little girls in Jewish. The child invited us in.
The door was opened and we were already inside before we noticed the big sign on the door, announcing in bright red letters that there is scarlet fever in the house.

“I have children of my own, I’d better come back next week,” called the census enumerator, as she hurried downstairs.
“Aren’t you going to take the sign off the door, so we can go out to play,” one of the little girls begged, tears running down her dark cheeks.

The little family had mistaken the census enumerator for the Health Department nurse. . .

The 1930 census was taken after the October 1929 stock market crash.  Stories from this census are heart-wrenching, perhaps not unlike what some of our fellow citizens might be facing today:

No Work for Six Months

In another house in the same row, there was a Jewish family of five where no one had worked in six months. The father, who fortunately owned the house, was a carpenter by trade and he had not had a job in a year. His daughter, a girl of 29 and a widow since she was 22, had been laid off by a Fulton street department store, where she was a salesgirl, six months ago. The son, who followed his father’s trade, could not get any work either.

Both children were born in Glasgow, Scotland, where their parents had gone from Poland and remained for three years, saving for enough money to come to the Promised Land. . .

Just a small sampling of stories extracted from census records (with, I might add, a tremendous amount of research to bring the stories to readers).  Another extensive article is dedicated to the 1880 census, one which genealogists refer to as a “mother lode”…. oh, the stories I found from this important census!

The January-February issue is on sale in the magazine store (click the link).  Subscriptions are the best way to ensure you don’t miss an issue and I offer three budget-minded options (recurring until you let me know you’d like to cancel):  3-month, 6-month and one-year.  A new “trial” subscription, a non-recurring one is now available here.  Give it a try for a year and I’ll send you a  no obligation offer to become a regular, recurring subscriber in one year.  As a bonus, the trial subscription offers the opportunity for you to choose two issues from the archives.  That’s 8 issues for the very special price of $24.

Have questions?  Contact me directly:  seh@digging-history.com.  For information on the 2020 census, complete with operational updates:  https://2020census.gov/en.html

Be safe and well,