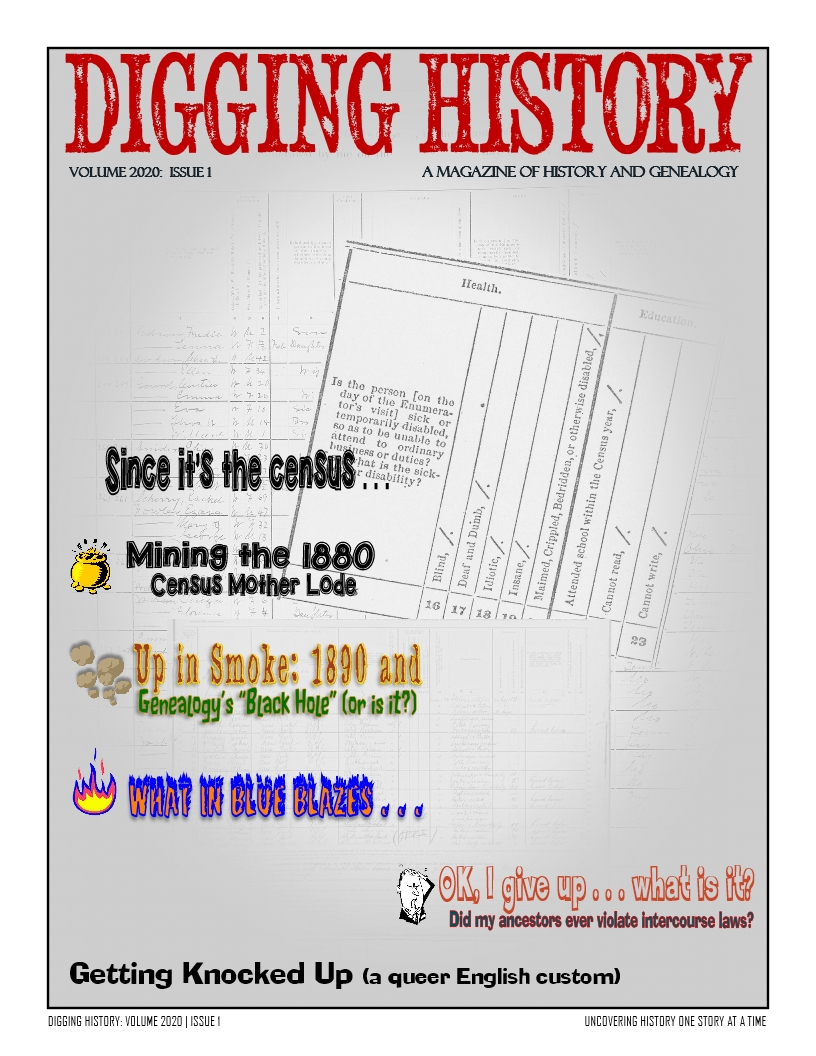 Since It's a Census Year - What better way to launch 2020 than with an article on this important decennial event.  You might be expecting a rather dry recitation of data gathered by the United States government, dating back to the first one conducted in 1790.  You would be wrong!  I’ve seen the data and accompanying documentation which the government used, and heaven knows only they must understand exactly what it meant!

Mining the 1880 Census Mother Lode - Family Search refers to the 1880 census as the “mother lode of questions pertaining to physical condition, criminal status, and poverty.”  Talk about stories!  It took the better part of the 1880s decade to process, but was it ever worth it, all courtesy of the “Supplemental Schedules for Defective, Dependent, and Delinquent Classes” (sometimes referred to simply as the “Defective Schedules”).

Up in Smoke:  1890 and Genealogy's "Black Hole" (or is it?) - Put on your thinking caps. What event which took place ninety-nine years ago has since become an ever-present challenging obstacle to genealogists? On January 10, 1921 most of the 1890 census went up in smoke – “most” being the operative word. A March 1896 fire had already destroyed a number of these records.

Anyone who has been researching for any length of time likely realizes finding one’s ancestors involves trying many “keys” to unlock hidden caches of records, photos, and so on.  Genealogists love census records because they are fairly easy to both access and assess, making the missing 1890 census a discouraging “black hole” for some who haven’t yet tried a little creativity. Why guess (or fudge) when you can do a little extra digging and maybe find a really interesting story!  This article is filled with information about this genealogical "black hole" and how to find substitute records utilizing some "research adventure" stories.

The So-Called Calendar Riots and Modern-Day Genealogical Research - Most of us don’t think about time and its measurement in terms of historical context.  It’s just time – something we never seem to have enough of in our “gotta-have-it-now” world.   Twice each year our internal time clocks (for the majority of Americans) are re-set because we observe what is called “Daylight Savings Time”.  We “lose” an hour of sleep in the Spring, only to “gain” it back in the Fall – “spring forward” and “fall back”.  World travelers jet around the world every day, losing a day or gaining one by crossing the International Date Line.

Subsequent references to the phrase implied there had been “calendar riots” circa 1752 when England decided to join the rest of continental Europe and adopt the Gregorian calendar which had been around since the 1580s.  Attempts to locate the phrase “give us our eleven days” or “give us back our eleven days” in the eighteenth century yielded a big goose egg, although simply using “eleven days” yielded a few references in both England and America around the time of the calendar shift. . . Plus, the story of "setting standard time" in the late nineteenth century (to avoid "fifty-three kinds of time").

What in the Blue Blazes . . . happened to my ancestor's (fill-in-the-blank) record? - Family Tree Magazine (May/June 2018) called them “Holes in History” – destructive fires throughout United States history with far-reaching effects on modern-day genealogical research.  It might have been the deed to your third great-grandfather’s land in Mississippi, your grandfather’s World War II service record, or the missing 1890 census records.  This article will take a look at the stories behind these devastating events and provide tips for finding substitutes.

Here’s something we can all agree on:  nineteenth and early twentieth century courthouse fires are the bane of genealogists everywhere.  Have you ever wondered why so many courthouse fires occurred in the latter half of the nineteenth century?  Would it surprise you to find that many of them were set nefariously?  (It shouldn't.)

Getting Knocked Up (a Queer English Custom) - Once upon a time everyday working folks paid someone to “knock them up”.  This, of course, elicits winks and giggles amongst 21st century denizens as “knocked up” often refers to what Merriam-Webster calls “sometimes vulgar: to make pregnant”.  There was nothing vulgar intended or implied as this quaint and curious English and Irish custom, begun during the Industrial Revolution and carried forward into the early twentieth century (and beyond for some locales), was an honorable occupation.   Before alarm clocks were available and affordable, “getting knocked up” was essential to ensure working men and women avoided fines for arriving late to work.

OK, I Give Up . . . What is It?  (Did my ancestors ever violate intercourse(!) laws?) - First, I write an article about getting “knocked up” and now “intercourse laws”. Ahem.  Lest anyone think I’m referring to the world’s oldest profession, let me explain.  I run across many interesting phrases and curious terms while researching family history for my clients or research for the magazine.  One phrase popped up recently and curiosity got the best of me (as it so often does!).

True Grit:  Heck Thomas and Sam Sixkiller - This is a companion article to "Did my ancestors ever violate intercourse laws?  The short answer -- yes, if your ancestor lived near or among Indians they may have at one time or another "violated intercourse laws".  These two legendary "bad-ass" lawmen were kept plenty busy in Indian Territory back in the day.

Submitting Your Review, Please Wait
Your Review Has Been Submitted Successfully

Add a review for January-February 2020