Gold was first discovered near the Idaho border in eastern Oregon in 1884 by Lon Simmons.  The town of Cornucopia, which in Latin means “Horn of Plenty”, sprung up – said to have been named after the mining town of Cornucopia, Nevada.  In July of 1885 five hundred men had already converged on Cornucopia, “quite a village”, reported the Morning Oregonian:

There is no doubt about the mines.  They are very rich.  Gold is being brought in every day and to see the rock is to be convinced that the mines are a big thing.1

Miners reported veins so rich that big nuggets would tumble right out of the rocks.  Over the years sixteen mines produced 300,000 ounces of gold, although one source estimates that eighty percent of the gold ore body still remains.2

The early years from 1884 to 1886 produced the biggest gold booms, the town expanding with general stores, saloons, restaurants and hotels. However, unlike many other western mining towns, Cornucopia was a fairly tame place it seems with only a few killings (and suicides).

Cornucopia was situated in a mountain valley and known for its extremely harsh winters. During the winter of 1931-1932 one resident had kept meticulous records, indicating that by early March of 1932 over twenty-eight feet of snow had fallen. Massive slides were most common in the month of March as the snows began to melt.

In February of 1916 a snow slide buried a bunk house, but no injuries were reported after occupants were dug out. In January of 1923 a mother and her two children were killed when snow slide buried their home. The woman’s husband was thrown against a hot stove but survived.

The steep terrain required the use of aerial tramways and mining operations continued during the winter as weather permitted. You can find historic photos of the town and its epic snowstorms here.

Over the years fortunes of the mining operations rose and fell as the company went bankrupt, was sold, revived – and then repeated the cycle over again several times. In 1902, “the Cornucopia group of gold mines contains what is probably the largest ore body in the Pacific Northwest, if not in the United States”, according to the one newspaper.3

In the early 1900’s as many as seven hundred men were employed by the mining company. At its peak the mines were considered the sixth largest operation in the nation. Following yet another “fire sale” in early 1915, another gold strike was discovered in November. One newspaper made the following prediction:

The recent gold strikes in Cornucopia district, Baker county, have started a regular old fashioned rush to that old camp. The whole country is being staked out and some very rich ore is being uncovered. Some day a shaft or tunnel deep into old Greenhorn mountain on the line between Baker and Grant counties, is going to open up ore bodies that will make the old Comstock look to its laurels.4

In late 1921 a “lost vein” was discovered and the following year electricity was available and a twenty-stamp mill constructed, capable of producing up to sixty tons of ore per day.5 The mining company was again sold in early 1929, followed by rapid redevelopment. Then, of course, came the crash of 1929. 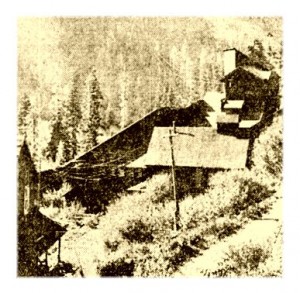 The 1930 census enumerated only ten people in Cornucopia, but by 1934 mining operations were starting up again after the decline. The following year mill tailings from cyanide-processed ore of years past was being converted into gold. In 1936 weekly wages for a workforce of between 100 and 125 miners totaled $15,000 with $8,000 per week expended for supplies.6

In July of 1936 all but fifteen of 175 miners struck for higher wages (one more dollar per day) and two paydays per month. By 1938 the company was touting its highest monthly profits ever – $100,000 in September of that year. 1939 was even more productive and Cornucopia mines were producing sixty-six percent of Oregon’s gold.

The 1940 census showed a significant increase in population from the last census: 10 in 1930 to 352 in 1940. Clearly, the mines were operating at peak capacity as the seventh largest operation in the United States. Despite this, operations were closed near the end of 1941. By early 1942 gold mining operations throughout the United States were ordered closed by President Roosevelt to concentrate the mining labor force on extracting war-related metals. 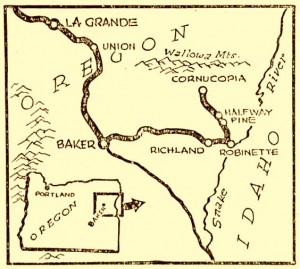 Following the war gold mining operations in some areas resumed, but Cornucopia was deemed a “war casualty”. The town had been largely abandoned. Today there are a few still-standing buildings and rusty machinery to see, but of course the best time to visit is during the summer.