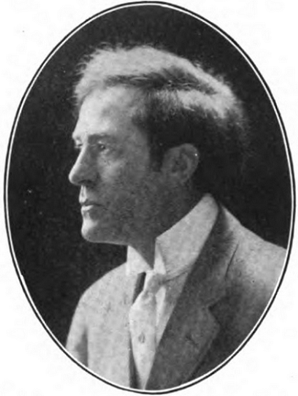 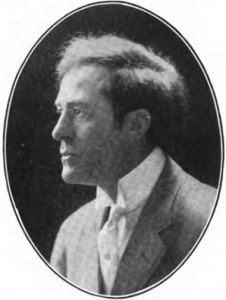 A couple of weeks ago my Tombstone Tuesday article asked the question “What’s In a Name?”.  I highlighted a few and have since discovered more for future articles.  One of the most unique names I came across was a man by the name of Nephi United States Centennial Jensen.  Here is his story.

Nephi United States Centennial Jensen was born on February 16, 1876 to parents Soren and Kjerstine (or Christina) (Rasmussen) Jensen.  His Danish heritage is interesting.  Soren was born on June 14, 1838 in the town of Hvirring, Denmark.  His parents, Jens Peter Sorensen and Anna Kuerstine Jensen were wealthy farmers.

Soren prepared to become a Lutheran minister but in 1859 was introduced to the Mormon faith. After his conversion, Soren worked as a missionary before immigrating to America in 1860. Whether or not his parents approved, family historians1 write that Soren signed away all inheritance rights to his family’s estate and borrowed $173 to pay for passage to New York. Smallpox had broken out on board the ship and for two weeks following arrival no one was allowed to leave the ship.

Once the quarantine was lifted, Soren joined his fellow Scandinavians and boarded a train to Omaha. At that time, the railroad terminated in Omaha. In order to reach Utah Territory, he joined a caravan of other LDS members who would use wagons and handcarts to cross the vast plains. Before departing, Soren married Elna Peterson, a Swedish convert on July 5, 1860.

That same day the caravan departed with six wagons and twenty-two handcarts. Seventy of the one hundred and twenty-six persons departing that day were Scandinavian who spoke no English. Their journey was full of challenges and dangers, but all arrived safely at the Eighth Ward Square in Salt Lake City on September 24, 1860. Soren and Elna settled in the First Ward and together had four children. He was ordained a Seventy on February 7, 1861.

During the journey across the plains, Soren had proven himself a skillful buffalo hunter. After arriving in Salt Lake City, he became a skillful carpenter and worked on the Mormon Tabernacle for three years. He practiced polygamy – marrying Kjerstine Rasmussen on March 9, 1867 (seven children), Karen Juliusen on April 18, 1868 (six children), Ann Johanna Jensen on September 12, 1878 (three children) and Petrea Cathrina Hansen on February 21, 1884 (five children).

America was celebrating its centennial in 1876 and apparently his parents decided to name their son in its honor. Sometimes he is referred to as Nephi U.S.C. Jensen (for short, I suppose). There were actually several other people named Nephi Jensen, however, and at least one of them appeared several times as a troublemaker of sorts throughout the years in the Salt Lake Tribune. 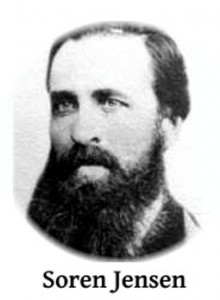 According to family historians, Soren went on a mission in Denmark from 1876 to 1878 before returning to work as a carpenter in Salt Lake City. In 1885 he was called to St. John, Arizona and the following year to Mancos, Colorado. Presumably, at least some of the family traveled with him, since Nephi attended Union High School in Montezuma County, Colorado from 1892-1893.2

One of the children (Katherine) related years later that she and her half-brothers Joseph and Nephi had departed Salt Lake City for Mancos in 1887. Petrea and her children were already residing in Colorado while Soren had traveled back and forth from Arizona to Utah. Katherine and Nephi walked most of the way.

Soren and his family were grain farmers and Joseph and Nephi hauled manure all winter long to fertilize the land. It paid off after two or three years when the land began producing sixty-five bushels per acre. According to Katherine, Nephi was the only child allowed to attend school because her father thought the cowboys made too much trouble and ran teachers out of town. Soren had been a teacher in Denmark and taught his children to read and write.3

However, Nephi was allowed to attend high school and “outstripped all the students in school.”4 The teacher told Soren he couldn’t teach Nephi anymore. Nephi later attended the Latter Day Saints University (1895-6) and the University of Utah, aspiring to become a railroad engineer5. Instead, he received a call to missionary service in the South. The day following his twenty-second birthday Nephi departed Utah.

After arriving in Chattanooga, Tennessee he was assigned to the Florida Conference where he worked until July of 1900. He later traveled back to Arizona to work as a school teacher. There he met Margaret Fife Smith and married her on April 9, 1902.

LDS history doesn’t appear to record that he practiced polygamy, but in 1940 the census records that twenty-six year old Lila L. Jensen was the head of household’s wife. I didn’t find a marriage record, however, and I wonder if perhaps she was their daughter since she was only two years younger than Paul. Margaret is also enumerated as was twenty-eight year old Paul, presumably Nephi and Margaret’s son.

On February 12, 1906, Nephi was admitted to the Utah State Bar and for a few years was engaged in the practice of general law. From January 1, 1911 until August 1, 1913 he served as Salt Lake County’s Assistant County Attorney. He also made a name for himself by serving as a member of Utah’s state legislature during its seventh session (1907-1909).

As a member of the House of Representatives, he and Brigham Clegg were scheduled to give a talk, “by orders of the Federal bunch”. The Salt Lake Tribune referred to him as “the member with the long name”. The newspaper noted that both men were regrettably members from Salt Lake County whose mission was “to work their jaw continuously.”6

Clegg and Jensen were known for their habit of speaking about both sides of an issue and then voting the exact opposite of the way they talked. Clegg was the worst, and although Nephi Jensen was not as talkative as his colleague, he nevertheless was “badly afflicted with mouth disease, and loses no opportunity to get before the House.” Both appeared to be “nit-pickers”, as noted by the Tribune:

Nine-tenths of the motions made to correct the typographical and grammatical errors in the journal are made by these two persons and both labor under the delusion that they are legislating for the State. Several members said to The Tribune Saturday evening that if these two men from Salt Lake county could have their mouths laced as tight as their shoes that some real legislation, some needed legislation, might be enacted.7

Apparently, the actions of Nephi U.S.C. Jensen, who had “received the highest vote of any candidate on the ticket” rankled the Tribune’s editors. After his stint as the assistant county attorney, Nephi formed a law partnership with C.E. Marks (Marks & Jensen). For six years, he and Marks were regarded as one of the most prominent Salt Lake City law firms.

On April 22, 1919 Nephi was called to serve as president of the Canadian Mission with headquarters in Toronto. After his missionary service he returned to Utah and in 1928 was appointed as a Salt Lake County judge. Nephi retired in 1933 and devoted the rest of his life to writing tracts, pamphlets and books, including LDS study manuals.

On September 2, 1955 Nephi United States Centennial Jensen died at the age of seventy-nine in Salt Lake City’s L.D.S. Hospital after experiencing a ruptured appendix. Margaret lived several more years and died in 1969. Both are buried in the Wasatch Lawn Memorial Park cemetery in Salt Lake City.