Lewis Hawkins Davis left Indiana in 1851 and joined a wagon train in Independence, Missouri, heading west to Oregon Territory’s Willamette Valley.  Two years after arriving he headed north to Saunders Bottom in Lewis County, Washington where he built a double log cabin for his family.  His son Levi Adrian Davis filed a claim for adjoining property.  Upon arrival they remained a few days with the Saunders family, their nearest neighbors, while scouting the area for land.

The Davis family settled on a hillside in an area the Indians called Claquato (pronounced Cla-kwah-toh, the name means “high ground” in Salish).  The next order of business for Lewis, with the help of other settlers, was a road-building program, and all roads led to his home on the hill.  The first road went over the hill and down into the Chehalis Valley to the place where the Skookumchuck River emptied into the Chehalis River, a place where Lewis encouraged new settlers to camp upon arrival.

Lewis County was created on December 19, 1845 (originally named after George Vancouver) when Washington Territory was carved out of Oregon Territory. In 1849 the county was renamed after explorer Merriwether Lewis.

As was the case all across the West in the years encompassing the era known as “Manifest Destiny”, Indians viewed the white man’s intrusion on their lands with suspicion and distrust. And, of course, the better the roads, the more people came. In 1853 military roads were built, Olympia became the state capital and California 49’ers whose fortunes didn’t quite pan out headed to claim free land in Washington Territory.

Lewis Davis took advantage of the influx of settlers by offering lodging with meals and corrals for their horses and stock. The United States government began constructing stockades to protect settlers in 1855 and Davis obtained a contract, provided workers and his wife cooked for them. When the Indian troubles began several families moved to the safety of the stockade, but with only one hundred square feet of space some found it too confining and decided to take their chances.

However, not all of the Indians in the area were unfriendly. According to Chehalis by Julie McDonald Zander, a friendly Chehalis Indian by the name of John Heyton rode through the night to warn settlers when Indians were about to attack. When the Saunders family returned to their homestead in 1856 after the threats passed, they found their house, barn and fences burned, their stock killed and everything destroyed or stolen.

The Saunders family was forced to start over. According to Zander, the Cowlitz and Chehalis Indians were friendly with Schuyler Saunders. He preached the gospel and sang hymns and the natives called him “King George’s Man”.

In 1857 Davis built a whipsaw-type sawmill near where Mill Creek emptied into the Chehalis River. The first lumber produced was donated for construction of the Claquato Church. The church was built in 1858, one that still stands today as the oldest building in Washington. The inside was furnished with pews and a pulpit donated by the nearby community of Boistfort, an organ purchased by subscription, and a bronze bell shipped from Boston by boat around Cape Horn. The church’s belfry was unique – “a triple decker with a louvered square on the bottom, a smaller louvered octagon in the middle, and a symbolic crown of thorns on top” (The Daily Chronicle, Centralia, Washington; 10 May 1969). 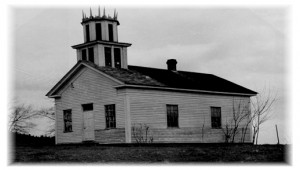 Because all of the furnishings, the land, materials and labor had been donated, the church opened its doors debt-free. On May 7, 1859, Lewis Davis and his wife Susan officially deeded the land at the corner of Military and Church Streets to the Methodist Episcopal Church, stipulating that the church must be available as a school facility for a period of seven years. The church’s first pastor, John Harwood, was also the first teacher at Claquato Academy.

The town continued to prosper and grow under Davis’ leadership. Claquato thrived as a way station with hotels and other shops to accommodate travelers as well as local residents. The Davis Prairie post office was established on May 10, 1858 and renamed the Claquato post office on September 15 of that year. In 1862 the courthouse was completed after the state legislature agreed to designate Claquato as the county seat if Davis would donate the land and provide the materials.

In 1864 the town had fifty residents, but that same year lost its founder. Lewis Davis died from injuries sustained in a fall at his sawmill. Towns like Claquato with its growing lumber industry needed railroads to continue to thrive, but when the Northern Pacific Railroad bypassed Claquato in 1874, Claquato lost the county seat on July 4 as residents gradually moved to the new county seat of Saundersville (later renamed Chehalis, and still the county seat today).

On August 6, 1902 the town of Claquato was officially vacated. The church, of course, remains and was used for Sunday School and occasional services until the mid-1930’s. The building had deteriorated, and after a time the Lewis County Commission undertook steps to restore it. In 1973 it was added to the National Register of Historic Places. The large cemetery, started in 1856, is still utilized and maintained.