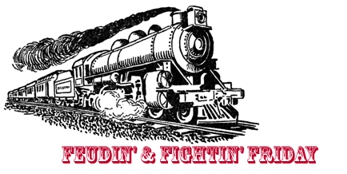 While doing some family research last week, I came across something called a “frog war”.  What’s a frog war?  I’ve done some “frog” stories, one called “The Battle of the Frogs” and one about an old horned toad named Rip, but this one isn’t about an amphibious creature or a lizard.  This one had to do with railroad lines.

In the late eighteenth and into the early nineteenth century, the fledgling new American government began building a series of turnpikes, toll roads and canals to facilitate transportation of goods, as well as westward expansion.  A Revolutionary War veteran, lawyer and politician by the name of John Stevens III experimented with steam in the early 1800’s and was the first to construct a steam-powered locomotive in the United States, testing it on a track which ran around his Hoboken, New Jersey estate.

The railroad boom between 1830 and 1860 saw numerous long-distance and regional rail lines established, accompanied by fierce competition for business and less dependence on waterways for transporting goods. New Jersey, on the eastern seaboard, was an important launch point to transport goods westward.

In April of 1846 the Pennsylvania Railroad, or “Pennsy” as it was sometimes called, received its charter to begin the process of surveying and laying track. Its main objective was to provide a link between Philadelphia and the West, as well as compete with the likes of the Baltimore and Ohio (B&O). By 1852, the Pennsy was on-line and doing well – revenues greatly exceeded expectations.

In 1850 the Pennsy had also become the first railroad to operate its own coal mining operations in northeastern Pennsylvania. Steadily the Pennsy would grow to be one of the largest railroads in the country, with an operating budget exceeding that of the United States government, according to Pennsylvania Railroad History. With control of ten thousand miles of track and affiliations with hundreds of other rail lines, the Pennsy was one mighty railroad – considered by some to hold a monopoly.

The Pennsy had a branch in the Hopewell, New Jersey area called the Mercer & Somerset Railway, lying directly in the path of the right-of-way for the Delaware and Bound Brook. To accommodate the “conflict”, the DBB would need to construct a “frog”. In simple terms, a frog refers to the common point where two rails cross, or as the Scotch Plains Times described it in a 1963 article: “an intersection whereby trains on one line cross the tracks of another.”

That shouldn’t have been a big deal, as the newspaper continued, “normally frogs could be laid with no more noise than the sound of sledges striking spikes.” This frog was different because it audaciously challenged the Pennsy monopoly in western New Jersey. On the morning of January 5, 1876 the DBB would lay down the gauntlet, so to speak – but not without a show of Pennsy might.

The Pennsy had little regard for the law passed in 1873 and sent a train to sit idling at the exact spot where the frog was to be installed. When the 7:15 a.m. southbound Mercer & Somerset was approaching (an affiliate of the Pennsy), the Pennsy train was backed onto a siding. However, DBB workers had been watching from surrounding bushes and suddenly ran out toward the sidelined train. 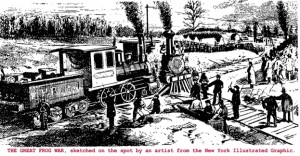 DBB workers placed steel rails and wooden ties in front of the Pennsy train, chained it to the tracks, and erected a barrier to prevent other trains from coming through until they were able to lay down the frog. Pennsy headquarters got wind of what was happening and sent their own men to board a locomotive at Millstone, proceed to Hopewell and ram through the barricade.

The train from Millstone headed west to Trenton and then turned northward toward Hopewell at an incredible speed for that day – thirty-one miles in thirty minutes! A DBB locomotive had been pulled up to protect the area where the frog was to be installed, but the Millstone train, seeing no impediments at all, rammed through the barricade and into the DBB train. As you might imagine, this little “frog war” caused quite a stir in the surrounding area.

Both railroads sent reinforcements, the Pennsy sending a train which could feed up to six hundred men if necessary. Seeing hundreds of railroad workers facing off, with hundreds of spectators and the press watching, the Mercer County sheriff called on New Jersey governor Joseph Bedle to send the militia.

The militia arrived around midnight and you’d think things would calm down and no further challenges from either side would be made. However, the next morning it became apparent that the locals were standing with DBB when they helped ripped up Pennsy track, forcing the Pennsy engineer to head out over a trackless area – the crowd cheered at the departure.

The courts, enforcing the law on the books, quickly ruled that the Pennsylvania Railroad had no right to interfere with the frog-laying by the Delaware and Bound Brook. The Pennsy agreed to abide by the law, and the militia made a regal affair out of their “victory” by dressing up in full uniform and reading the court order at a ceremony.

he Pennsy wrecks were hauled away, and as the crowd watched, the frog was put in place at 2:00 p.m. on January 8. DBB Locomotive No. 37 was the first train to cross the frog. The “Great Hopewell Frog War” was thus concluded and had brought an end to railroad monopolies in New Jersey. Perhaps the Reading Railroad liked the DBB’s “moxie” – in 1879 they leased the Delaware and Bound Brook for 999 years, essentially merging the two lines.