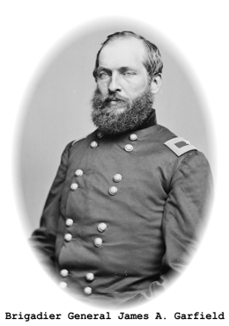 I’ve been reading an excellent book about James Abram Garfield, the twentieth President of the United States (look for a book review soon).  I didn’t really know that much about him, except that he was assassinated not long after he was inaugurated in 1881.  Not a lot of books have been written about him, but he lived an amazing life, rising from poverty to the presidency.

One event that caught my attention, and made him famous, was the Civil War Battle of Middle Creek in eastern Kentucky.  The description provided by author Candice Mallard reminded me of the Bible story of Gideon and his rout of the Midianites.

James Garfield had been pursuing an academic career as a professor, and later president of the Eclectic Institute, when an Ohio state senator died unexpectedly. Garfield was asked to take his seat and later won it outright. When the Civil War began, he was eager to enlist, although Ohio Governor William Dennison, Jr. convinced him his service in the legislature was needed more urgently at the time.

In the summer of 1861 Garfield entered the Union Army as a lieutenant colonel, and after reaching the age of thirty in November, was promoted to full colonel. His first task was to assemble the 42nd Ohio Regiment which he would command. Defending Kentucky, a strategic border state, from Rebel advances, was his first assignment. Kentucky was also the birth home of President Abraham Lincoln, who emphasized, “I hope to have God on my side, but I must have Kentucky.”

As it turned out, however, Garfield and his regiment were outnumbered (not to mention inexperienced) and faced an Confederate general, Humphrey Marshall, who had graduated from West Point in 1832, one year following Garfield’s birth. Garfield, an academic, was up against Marshall, a seasoned military tactician.

Still, Garfield didn’t hesitate to take on the challenge – his first step was to pour over maps of eastern Kentucky so he could familiarize himself with the area his troops had been tasked to defend. The battle for eastern Kentucky, however, would come down to one decisive campaign in early 1862.

Garfield and his troops (which included not only the 42nd Ohio Infantry but the 14th and 22nd Kentucky Infantries) departed on their mission in November of 1861. In the early days of January 1862 they were approaching Paintsville, Kentucky where Marshall’s troops were encamped. The Rebels, although outnumbering Garfield’s troops, were low on both supplies and morale. At that time Garfield was about eighteen miles away, so instead of advancing on the enemy, Marshall decided to stay put, hold Paintsville and see what transpired.

Marshall must have realized that it would have done him little good to attempt a direct attack because of the lack of supplies. Garfield also knew that he, with mostly “green” recruits, was not only outnumbered but “out-experienced” – plus the fact that the Kentuckians weren’t all that well-armed or likely predisposed to be fighting their fellow Kentuckians in the first place. Like Marshall, Garfield could have decided to just sit and wait.

Instead, Garfield, according to Garfield: A Biography by Allan Peskin, “a strong believer in ‘vigorous and well directed audacity,’ was eager for action.” His staff was far more cautious and advised he wait, but instead Garfield was determined to advance. At the time, the 40th Ohio had not yet caught up to the 42nd and the Kentuckians under Garfield’s command. Considering that, his plan going forward was indeed audacious – Garfield chose to divide the small force into three detachments and try to deceive the Rebels into believing they were facing a much larger force.

There were three roads leading into Paintsville and Garfield began by sending the first detachment down the river road. Marshall had already stationed Confederate pickets along each road leading to the town, so it wasn’t surprising when the two sides met. Garfield’s troops made a lot of noise, which after the Confederates reported back to Marshall, brought more Rebels to defend the river road.

About an hour later Garfield sent the second detachment up the second road, also making lots of noise. Marshall sent reserves not already fighting the first Union detachment down that road. Garfield’s last detachment was sent down the third road, and in the ensuing skirmishes, Marshall’s forces became convinced (wrongly, of course) that they were facing an overwhelming force. Already low on morale and scurrying about to respond to Garfield’s “advances”, the Rebels instead decided to flee from the area, leaving Paintsville deserted.

From this point on, the Rebels were forced to continue retreating toward Prestonsburg and the Middle Creek area. In the meantime the 40th Ohio arrived under the command of Colonel Cranor. Cranor wanted his men to rest before continuing on, but Garfield wanted to seize the opportunity to pursue Marshall.

Around noon on January 9, about eleven hundred men with three days of rations, started in the direction of the fleeing Rebels. As they drew closer to Marshall’s position it became apparent they were about to encounter the enemy, so Garfield sent word back to Paintsville to send reinforcements. That night his troops spent the night shivering in an icy cold rain, too near enemy lines to risk camp fires.

As it turned out, Marshall’s troops on the very same night had become dispirited enough to demand retreat from Kentucky. At three o’clock on the morning of January 10, Garfield rallied his troops and an hour later were again advancing toward their target. Garfield thought Middle Creek would be a good place for his troops to entrench themselves, thinking that Marshall was a few miles upstream at Abbot’s Creek.

Instead, as they approached Middle Creek, shots were exchanged with the Rebels. By midday they had seized one prisoner. Garfield paused at one spot and could see enemy positions in the distance. His plan had been to cut off Marshall’s retreat, but instead realized he was now facing most of Marshall’s troops.

Again, however, Garfield chose audacity. He sent two companies to clear one side of the valley of Rebels, and then instead of waiting to see the results, he ordered the rest of his troops into a battalion drill, marching as if they were on parade – “for the sake of bravado and audacity”.

Very recent history would be repeating itself, because his intention again was to make the Rebels think they were facing a more overwhelming force. It worked because Marshall later related that he was convinced that Garfield had at least five thousand men. Even with the deception and ensuing confusion, it wasn’t an easy victory, with each side advancing and falling back throughout the day. As Peskin wrote:

This was the pattern of the day’s fighting: a succession of uncoordinated charges and withdrawals, with a great deal of shooting and very little bloodshed – a “regular ‘bushwacking’ battle.” Garfield handled his troops with little imagination or enterprise, flinging them against the rebel line in driblets, never committing more than two or three hundred at any one time. . . Marshall, for his part, fought a completely passive battle, content, by and large, merely to maintain his original position. At various times during the afternoon a well-directed charge could have sent Garfield’s disorganized men reeling down the valley, but Marshall did not really want a victory. He was satisfied to continue his retreat in peace.

As Civil War battles went, this one wasn’t particularly bloody, although there were casualties – and more on the Confederate side. After the battle ended, however, both sides greatly exaggerated the others one’s casualties – Garfield was sure at last 125 Confederates had been killed and Marshall thought his troops had killed 250 and wounded another 300. Who knows what would have happened, for either side, had Marshall and his troops not been confused and dispirited by Garfield’s deceptive tactics in the first place at Paintsville.

For James Garfield, it earned him a reputation for “bravado and audacity” and a promotion to brigadier general. That’s not to say his triumph didn’t give him pause. As author Candice Mallard related in her book, Destiny of the Republic, Garfield, upon seeing the enemy mortally wounded and strewn about, realized he was responsible for the carnage. She continued: “It was in that moment, Garfield would later tell a friend, that ‘something went out of him . . . that never came back; the sense of the sacredness of life and the impossibility of destroying it.’”