By the mid-nineteenth century there were few Chinese immigrants who had made their way to America.  In early 1849, there were only fifty-four in the entire state of California, but that would change as word spread and gold rush fever took hold.

The prospect of work, either in the mines or whatever supporting job could be found, brought Chinese men fleeing rebellion and poverty in their own country to California and beyond.  Chinese immigration continued apace until in 1876 there were over 150,000 Chinese immigrants in the United States, 116,000 in California alone.

Most men came alone, calling themselves “Sojourners,” implying they never intended to stay, but rather someday would return to their homes and families in China. As menial and low-paying as some of the jobs they took, the Chinese still earned more money in America – and if they were careful and saved it, would amass what to them would be quite a fortune.

When it became necessary to build a railroad heading east out of Sacramento, it was the Chinese workers who took on the back-breaking and dangerous work of laying track and blasting tunnels through the mountains. Of the approximately twelve thousand Chinese who helped build the Central Pacific railroad line, about one-tenth, or twelve hundred, were killed.

When the Central Pacific met the Union Pacific in Utah in 1869 there was a great ceremony – and then thousands of jobs disappeared, many of which had been filled by the Chinese. Yet, they stayed even without their families and continued to find ways to continue working, especially in the West during the mining boom years, from Tombstone, Arizona to the mining camps of Montana.

Today, the saying goes that illegal immigrants should be welcomed because “they do the work most Americans won’t”. To a certain extent that was true in the mid-to-late 1800’s for Chinese immigrants. They were willing to work and, truth be told, were probably exploited.

It became apparent that in many cases, however, Chinese workers accepting lower pay were displacing (or replacing) Caucasian workers. In the summer of 1870 white workers in San Francisco held large demonstrations – the Chinese were no longer welcome. The following year a riot broke out in Los Angeles and twenty-three Chinese were killed, yet no one was charged with their murders.

In 1882, the United States Congress unsuccessfully tried to limit the number of Chinese immigrants by passing stricter immigration laws. Years before the Chinese had worked in the gold mines, but now they were being hired to work in the coal mines, often replacing other immigrant miners of Scandinavian, Italian, Welsh or Irish heritage. Again, the Chinese were simply willing to work for much lower wages.

The Union Pacific line stretched across southern Wyoming in large part because of the area’s large deposits of coal, and the Union Pacific owned some of those mines. When the railroad became bogged down in financial difficulties, they cut miners’ pay. To continue boosting their bottom line, the company required its employees to shop in their company stores where prices were much higher. Unsurprisingly, this brought labor unrest and strikes. 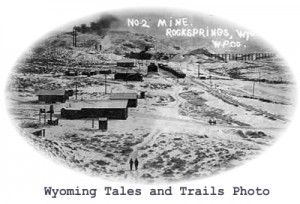 After one such strike in 1875, Union Pacific brought in Chinese miners. The Chinese miners outnumbered white miners three to one at that point, and by 1885 there were six hundred Chinese and three hundred white miners working the mines of Rock Springs, Wyoming. Newspapers across the country were already filled with articles and editorials calling for stricter Chinese immigration.

On the second day of September 1885, after white immigrant miners had struck and failed in their attempts to establish a union, tensions boiled over. The Chinese, brought in ostensibly to break the strikes, were allowed to work the richest coal seams, according to History.com.

An armed mob of white miners converged on the area of Rock Springs known as “Chinatown” and began killing the Chinese, even as they scrambled to flee the mob. That day was a Chinese holiday and most of the miners were not at work. Paul W. Papa, author of It Happened in Wyoming, described the scene:

They fell upon the Chinese, beating men with the butts of their guns and robbing them. If a Chinese man didn’t have a weapon, he was released – after, of course, he was robbed of all his possessions. If a Chinese man didn’t stop, he was shot. The Chinese panicked. They ran to their homes, but found no safe haven. The mob easily broke down the doors of the hastily built shacks and beat the men as the screaming women wrapped their arms around crying children – partially to protect them and partially to prevent them from seeing their fathers being so severely beaten.

Not only were the Chinese killed, some were mutilated, scalped, decapitated or hung – some acts so despicable and heinous I won’t mention them here. At least twenty-eight Chinese were killed and about fifteen wounded, although some sources believe the toll could have been higher. 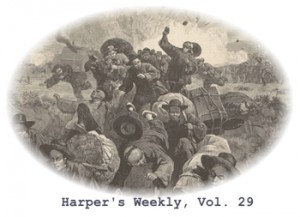 When the Chinese returned the following week, escorted by United States troops, they discovered horrifying scenes of the carnage left behind. In an essay entitled The Rock Springs Massacre, author Tom Rea describes the scene encountered by a trainload of Chinese miners:

Perhaps the odor of burnt things gave the men some idea of what they were about to see. Mixed with it was a sicker, sweeter smell – the smell of dead things that had started to decay. The 600 Chinese coal miners had been traveling all day – toward San Francisco, Calif., they had been told, and safety. Then they stopped, and the sound of the boxcar doors being slid open came rumbling down the train. . . . the men knew immediately where they were. They were right back in Rock Springs, Wyoming. . . . Rock Springs’ Chinatown was gone. Even more horrifying, there still were bodies in what had been Chinatown’s streets. . . . Some had been buried by the coal company, but some [these] had not. Many were in pieces. These were bodies of their friends, sons, fathers, brothers and cousins, murdered by a mob of white coal miners.

The railroad, however, presumably brought the miners back to bury their dead and then get back to work. Understandably, some of the Chinese were afraid to return to work, but after the threat of being fired (and never hired again) if they didn’t return, many acquiesced and went back to the mines. Some found a way to leave Rock Springs and never returned.

Even after all of the carnage and willful murder of the Chinese, in broad daylight no less, no one would step forward as a witness. No charges were ever filed against the white miners. After Chinese diplomats tallied damages in the amount of almost $150,000, Congress finally agreed to reimburse the miners for their losses.

Camp Pilot Butte was built between Rock Springs and Chinatown and troops were stationed there for several more years. The Chinese, however, gradually departed Wyoming, even as the federal government continued to look for ways to limit their immigration to America.