Gold and silver were discovered in the late 1880’s in what is now southwest Catron County, New Mexico.  Preferably, in order to contain costs, gold and silver needed to be processed as close as possible to the mines.  However, the problem in this particular area was that Whitewater Canyon, where the majority of the mines like the Confidence, Blackbird, Bluebird and Redbird were located, was too narrow.

The next best location was at the mouth of the canyon and in 1893 John T. Graham arrived to build the mill, and in so doing had the mill town that would spring up named after himself.  The mill location, however, had its own set of challenges since there wasn’t enough water to run the steam generators.  Nor was there sufficient water to supply the town of around two hundred residents.

This problem necessitated the construction of a four-inch water pipe which ran from the high mountain waters down to Graham, a distance of about three miles. To prevent freezing, the pipe was packed around with sawdust and encased in wood. By 1897, mining operations had increased substantially enough to require a larger generator, which in turn required a larger water supply.

An eighteen-inch pipe was constructed parallel to the original four-inch line, and, at least for that period of history, considered to be quite an engineering feat. In order to provide adequate support for the pipes, holes had to be drilled into the canyon walls to ensure the pipes were braced sufficiently to remain in place. At various places, the pipeline rose some twenty feet above the canyon floor.

The pipeline, of course, required monitoring and repair, which meant walking along the eighteen-inch pipeline – referred to as the “catwalk”. After all the extraordinary efforts and engineering feats undertaken to provide sufficient water for the mining operations, the mill never proved to much of a success. The post office, established in 1895, closed in 1904. After the mill closed for good in 1913, the town faded away. 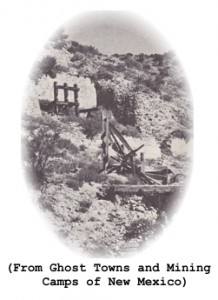 Still, the short-lived town of Graham and the surrounding area had its share of famous (or infamous) folks. Whitewater Canyon was a favorite hideout for Butch Cassidy and his Wild Bunch, as well as Apache warriors like Geronimo. William Henry McCarty, Jr., a.k.a. “Billy the Kid,” may have passed through the area at some point – William Antrim, his step-father, was the town’s blacksmith. 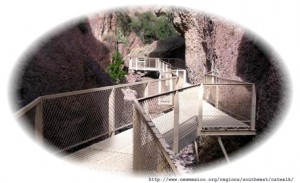 Today all that remains of the town of Graham are a few remnants of the mill. The Catwalk, however, has become a national scenic trail. Long after the town closed down and the pipelines had fallen in disrepair, the Civilian Conservation Corps, a public works project enacted by President Franklin D. Roosevelt in response to The Great Depression, rebuilt the catwalk. Amazingly, some of the original eighteen-inch pipes provide support for the present structure. The Catwalk today is approximately a 1.1 mile hike from trail head to the end (2.2 miles out and back).

Note: According to this Forest Service web page, the area is undergoing some restoration, perhaps as a result of recent flooding in the area.