The period of history encompassing the early to mid-1800’s was marked by the emergence of several utopian societies in America, presumably founded to establish their own version of “heaven on earth”.  Sir Thomas Moore had first coined the Greek term for his 1516 book entitled Utopia.  Utopia was a fictional island society located in the Atlantic Ocean.  The term is often used to describe an intentional community that is established to engender an ideal society.

Essentially, Fourier’s ideas were the forerunner to communism since he believed that the perfect society was one where everyone shared work and profits, all living together in self-contained and structured communities. He also designed the sprawling building commune residents would dwell in, calling it a phalanstère from the Greek word “phalanx”. The center portion of the complex would be for shared activities such as meetings, dining, libraries and so on.

One area off the center was for “noisier” work activities such as carpentry and the other for living quarters and social halls. The premise of the society was that very soon the world was about to enter a 35,000 year-long period of peace. Not surprisingly, two years after its founding the experiment failed because it wasn’t profitable, even after extracting fees from would-be residents of Utopia.

However, that didn’t stop another fellow by the name of John O. Wattles from attempting the exact same thing. Wattles, as it turns out, made a critical mistake when he purchased the land and brought his own followers to Utopia in 1847. He decided to move the community closer to the Ohio River. The structures, including an underground church where secret rituals were practiced, were completed in early December of that year — and the timing could not have been worse. 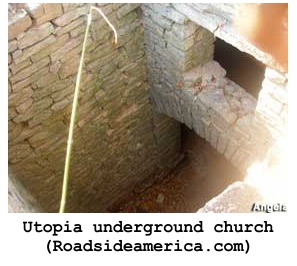 On December 13, 1847 one of the worst floods of the nineteenth century occurred along the Ohio River. Unfortunately, most of Wattle’s followers were killed when a flash flood collapsed the walls of one of the social halls where a dance was being held that night. The few that survived later left the area. Like Moonville, Ohio (see a past article here), the area is said to be haunted, especially on rainy nights (dripping ghosts and all kinds of spooky noises – ooooh!).

The next experimental society was organized by Josiah Warren, sometimes referred to as America’s first anarchist. His views clearly leaned in that direction: “statute laws are at best hindrances, and must be swept away, not by violence, but by the slowly evolved sense of justice and equity which eventually undermine all surviving forms of authority.”

Warren had been involved in the New Harmony community in Indiana, but after leaving there set out to establish his own experimental community. He had his own followers, but for his new community to grow, new settlers would be required to receive an invitation to join the original settlers. There were noted differences in the structure of Warren’s community; rather than shared property, land was owned individually but goods and services were traded by exchanging labor amongst residents rather than cash transactions, a sort of barter system.

The community did experience growth, but the invitation requirement for new settlers proved difficult to implement and maintain. Land prices were also rising and then the Civil War began. Also, Warren had departed Utopia the year after he founded it, returning occasionally to visit. By 1875 some of the original settlers remained, although the area was known then as Smith’s Landing. 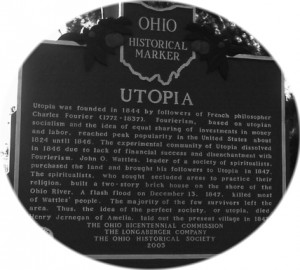 In 2003, Ohio erected an historical marker for “Utopia”. As Roadsideamerica.com points out, the town of Utopia is not entirely abandoned today:

Utopia has a tiny general store, but the old couple inside, chain-smoking, couldn’t offer us any postcards or souvenirs. “Is it utopian here?” we asked. They hacked and laughed.