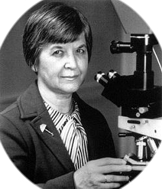 If you’re in law enforcement or serve your country in the military, you have today’s “mother of invention” to thank for helping protect you when bullets are flying.

Stephanie Louise Kwolek was born on July 31, 1923 in New Kensington, Pennsylvania to parents John and Nellie Kwolek.  As a young girl, while watching her mother sew she became interested in fashion, drawing and designing patterns for doll clothes and later sewing her own clothes – at one point Stephanie thought she might pursue a career in fashion design.  Her father, a foundry worker, died when she was ten years old, but during her early years he encouraged her to also explore nature.

She and her father would spend hours in the woods looking for plants, animals and insects. By her own account, like her father, she had a keen sense of curiosity and read more than most children her age. She would later remark that those characteristics set her apart from her peers and served her well later in her career.

After graduating from high school, Stephanie enrolled in the Carnegie Institute of Technology (now Carnegie Mellon University) in 1942 majoring in chemistry. She had considered various career paths before embarking on her education, including fashion design, teaching or pursuing a medical degree. At Carnegie, she was mentored by one of her chemistry professors, Dr. Clara Miller.

In 1946 Stephanie graduated from the Margaret Morrison Carnegie College with a bachelor’s degree in chemistry. She thought she might take a job, save her money and later continue her education in medicine. At that time women were being offered jobs in the chemistry field, especially right after World War II when men were still serving or coming home from the war. Some women with advanced degrees, however, would remain in those jobs only a short time before taking jobs in academia.

Stephanie, interested in research, decided to take a different path, deciding that DuPont would offer her the best chance at pursuing her passion. She joined a team of chemists called the Pioneering Research Laboratory who had just a few years before discovered nylon, the first synthetic fiber.

Although Stephanie still thought she might attend medical school, she found the research work so interesting that she decided to forego that ambition and remain with DuPont. The opportunity to discover new things was extremely satisfying to her. She later remarked that her male supervisors were very much interested in their own work and mostly left her alone to conduct experiments and make her own discoveries – a perfect combination for someone who was already has a keen sense of both curiosity and creativity.

In 1965, due to the possibility of gasoline shortages, a need arose to replace the steel wires in automobile tires with a new synthetic fiber. Her assignment was to find a super-stiff, lightweight fiber and she began to experiment on a group of long-chain molecules called aromatic polyimides. She discovered that, under the right conditions, these polyimides would form liquid crystals – the solution was usually thick but this one was more fluid. One of her colleagues believed the fluidity was due to contamination and refused to spin it for her because it might clog his equipment.

After she eventually convinced him to spin it, both were pleasantly surprised to find it resulted in the stiffest and strongest fiber anyone had ever seen. Stephanie immediately realized she had just made a very important discovery – an “aha moment.” First called “Fibre B” it later became known as Kevlar when DuPont patented it in 1971.

DuPont found numerous ways to use the new synthetic fiber – fiber optics, reinforcing roads, tires, bicycles and hiking boots to space equipment and more. The idea to use the fiber, in multiple layers, for army helmets and bullet-proof vests came later, and as they say “the rest is history.” In 1987 the DuPont Kevlar Survivors Club was founded by law enforcement officers who owed their lives to the bullet-proof vest.

Between 1961 and 1986 Stephanie Kwolek was awarded seventeen patents, although after signing over royalties to DuPont she never earned any money from her invention. Another interesting fact about this amazing woman was that she never pursued any higher degree than the original bachelor’s degree she received in chemistry in 1946.

Stephanie Louise Kwolek died recently in Delaware on June 18, 2014 at the age of ninety.