On May 26, 1863 a group of men (Barney Hughes, Thomas Cover, Henry Rodgers, Henry Edgar, William Fairweather, Bill Sweeney and others) were on their way back to Bannack, Montana, scene of a gold discovery the year before.  After being diverted from their route by a band of Crow Indians, the men camped at Elk Park.

While the others were away from the camp, Edgar and Fairweather discovered gold.  According to legend, they had spotted a piece of bedrock and hoped to find enough gold to purchase some tobacco in Bannack.  What they actually found turned out to be one of the richest deposits of gold ever found in the United States.

Although the men tried to keep their discovery a secret, upon returning to Bannack word spread of a new gold strike. Fairweather led a group out of Bannack and about halfway to Alder Gulch they formed the Fairweather Mining District. The original discoverers would have first pick of the claims.

After the first wave of miners arrived in the gulch on June 6, it took only three months for the population to burgeon to over ten thousand. The mining towns that sprung up along the gulch were known as the “Fourteen- Mile City”: Junction City, Adobe Town, Nevada City, Central City, Virginia City, Bear Town, Highland, Pine Grove French Town, Hungry Hollow and Summit.

Virginia City had originally been called Verona and later proposed to be Verina in honor of Jefferson Davis’ wife. This was happening, of course, in the middle of the Civil War. Apparently thinking it either objectionable or imprudent to take sides, the name became “Virginia City” instead.

Virginia City quickly became one of the most prominent cities in Montana Territory – the first territorial capital and home of the first Montana newspaper, the Montana Post, and the first Montana public school. Just a mile and-a-half west was Nevada City – both towns were the sites of some wild and woolly events and the rise of a group known as the “Vigilantes of Montana” – more about that in next week’s “Wild West Wednesday” article.

Interestingly, the Montana Post reported in December of 1864 that three sisters by the last name of Canary (ages twelve, ten and one) were wandering the streets of Virginia City as beggars while their father gambled. Could this have been Martha Canary, a.k.a. Calamity Jane, who was born in 1852? 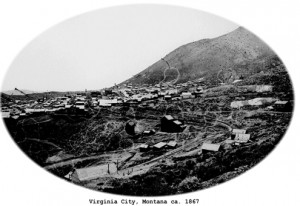 Neighboring Nevada City sprang up quickly as well, adding dozens of businesses – a dry goods store, dance halls, saloons and many more. Today the town, although mostly abandoned, is preserved in a unique way. Fourteen original buildings remain, but residents in the 1940’s and 1950’s replaced some of the dilapidated or destroyed sites with other buildings moved from other historic locations. Today the site is owned by the Montana Heritage Commission – sounds like it would be a great place to visit. 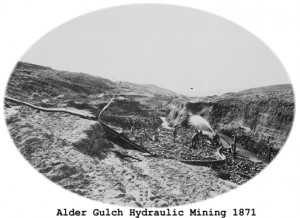 The primary method of gold extraction was placer mining, defined by Merriam-Webster as “the process of extracting minerals from a placer especially by washing, dredging, or hydraulic mining” and also known as free gold prospecting (dust, flakes and nuggets of gold). Between 1863 and 1866 it is estimated that thirty million dollars worth of gold was extracted in the gulch.

One source indicates that between 1863 and 1889 the United States Assay Office reported at least ninety million dollars in gold (which would be forty BILLION in today’s dollars). This despite the fact that by 1875 mining activity had been greatly curtailed and Virginia City had dwindled to less than eight hundred people. A significant portion of the remaining population were Chinese who continued to work abandoned claims. 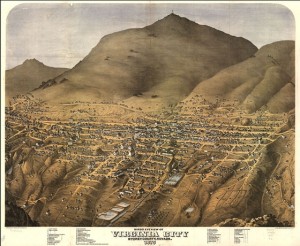 With the dwindling fortunes of Virginia City came a significant change – the territorial capital was moved to Helena. Still, Virginia City hung on (and today still has about one hundred and thirty residents). In 1898 new mining machinery arrived, a dredge boat by the name of Maggie Gibson, and the town experienced a bit of a resurgence, although those operations would leave a permanent scar on the landscape.

By 1937 dredging had ceased – World War I and the Great Depression had taken a toll and weakened demand. When America entered World War II, gold mining was deemed a non-essential activity all over the country. The economic engine in the area today is found in tourist dollars after efforts to preserve these old mining towns was undertaken several years ago, although since World War II sporadic activity has been noted when gold prices have surged.