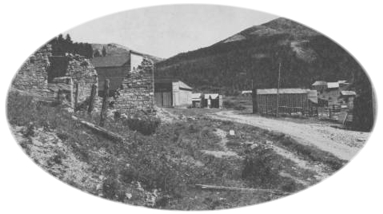 In 1880 five prospectors, “Skookum Joe” Anderson, c.c. Snow, Eugene Ervin, Pony McPartland, and David Jones, discovered gold in the Judith Mountains near Lewiston, Montana.  There are at least two theories as to how the mining town they founded got its name.  One story says that one of the early prospectors was named Maden and put up a sign calling the location “Camp Maden” – and later an “i” was added to make it Maiden.  Another theory is that the town was named after a friend’s daughter who was referred to as “Little Maiden.”

The Spotted Horse mine was by far the most productive mine, operating from 1881 until 1902 it yielded in excess of five million dollars in gold, with the largest yields coming during the early years when high-grade ore was being extracted. The Maginnis mine was opened in 1880 and worked at various intervals until 1899, and finally closed in 1909. Over the years Maginnis produced almost two million dollars in gold. 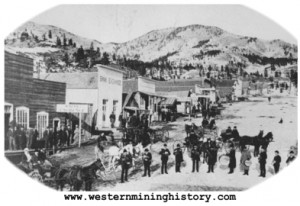 The town site was established in 1881, although neither platted nor surveyed. Instead lots were designated by selecting one and building a fence around it. News spread quickly and soon the town was booming. By 1882 there were several businesses, including saloons, clothing stores, general merchandise and dry-goods stores, a blacksmith, barbers, one law and one doctor’s office, hotel and restaurant. Obviously, cash was flowing from the influx of both independent prospectors and capitalists.

After capitalists began to enter the mining district, existing mines began to be extensively worked and mills were built to process the ore. Investors poured thousands of dollars into the Collar Company Mine to ascertain the possible yields. Unexpectedly, the mine closed in late 1883 after only a nine-day run. As it turned out, the collapse of the Collar Company was due to corporate mismanagement. The value of the mine had been overestimated and when expenses were more than expected, investors balked.

The failure of the mine was devastating to the town, since the company was basically bankrupt. That meant that employees wouldn’t be paid until a sale could be arranged. Another threat to the town’s prosperity had occurred earlier in 1883 when nearby Fort Maginnis (the town was situated within the fort’s reservation) posted an order requiring all residents to vacate Maiden. Protests were lodged and the army decided to instead reduce the size of the reservation to exclude Maiden and the surrounding mines.

In June of 1884 investors formed the Maginnis Company. With new infusions of investment cash, mining picked back up and miners were put back to work, a boon to the town of Maiden. Not only was commerce booming but culturally the town had a brass and coronet band, as well as an amateur baseball team. Maiden would also become a stop for two stage routes.

In 1885 the new county of Fergus was created and Maiden vied for the honor of being the county seat, up against the cattle town of Lewiston. The rivalry brought boasts from both sides, but in the end Lewiston won the seat in 1886, with mining taking a back seat to the cattle and sheep industries. Even with the appearance of prosperity, the town of Maiden would continue to struggle as the realities of mining in a remote location began to sink in.

There were water shortages which forced the company to build a reservoir. Another complication was the remoteness of the area. Freight delivery was expensive with steeply-graded trails which were best traveled during the dry season. Over the next several years, the fortunes and misfortunes of mining operations would vacillate – some years better than others. After a time the higher-grade ore played out and with marginal qualities of ore being extracted in the mid-1890’s, the population began to dwindle.

In 1896 there were less than two hundred residents and many of the mines had closed. By the early 1900’s, towns like Lewiston prospered and grew while the mining towns were languishing. In 1905, a fire destroyed most of Maiden. With no interest in rebuilding, Maiden became a ghost town.