During the nineteenth century thousands of people headed west to find their fortunes, but in 1865 gold was discovered in an unexpected place – in northern Minnesota, just south of the Canadian border.  The discovery was more or less accidental since the original survey commissioned by Minnesota Governor Stephen Miller was meant to locate iron ore deposits.

In 1864 Miller sent Augustus Hanchett to the Lake Vermilion area of northern Minnesota “for the purpose of determining the existence, character and extent of the iron depots in that vicinity.”  Hanchett began his survey in late September and soon confirmed the existence of deposits, but had little time to fully determine the quantities before winter set in.

The following year Governor Miller asked the legislature to fund a complete survey led by Henry Eames. Eames and his surveyors departed from Duluth in the spring and began to extensively survey Hanchett’s findings. Eames did indeed find iron ore and confirmed its presence but didn’t forward samples to the governor. Instead, Eames and his brother brought home samples containing quartz and then forwarded them to New York City for a chemical analysis. To ensure he would be the first to know the results of the analysis Eames ordered them sent to his attention. Not surprisingly, after receiving favorable results, Eames was eager to stake his claim.

Eames then forwarded samples of iron ore and quartz to the governor who ordered his own analysis. The findings were promising – the proportion of gold per ton was $25.63 and silver at $4.42 per ton. Governor Miller, like Eames, wanted the results telegraphed directly to him so that he would have personal knowledge before the general public. Thus, at least a week before the results were made public in the newspapers, he had already positioned himself to profit from the Lake Vermilion discovery.

In an article written for the Minnesota Humanities Commission, The Vermilion Lake Gold Rush, 1865-1866, Dana Miller observed that, of course, today such behavior would be unethical and illegal. However, the “gilded age” had begun, the period of time from 1865 to 1901 which was so-coined by Mark Twain. As Miller pointed out, these were perfectly acceptable practices and even thought to be “good business sense.”

The discovery of gold in those days caused waves of excitement no matter where it had been found. Before long newspapers across the country were reporting the news:

Even though the original estimates were less than thirty dollars per ton, speculations were already circulating as to the potential of fifty to sixty dollars per ton (without any apparent data to back it up). Daily news stories drove fortune hunters to Lake Vermilion, this despite the fact that the process of extracting the gold would be more difficult than that found in the West – some of the fortune-seekers even came from as far away as California. While there were plenty of individual miners, there were a number of small groups and corporations who wanted to invest time and money at Lake Vermilion. 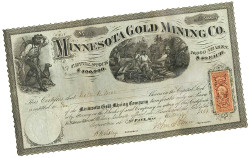 One company of twenty-five men each contributed $150 and formed the “Mutual Protection Gold Miner’s Company” (later adding twelve more partners). Thomas McLean Newson was the company’s president and founder. The “Mutuals” (as they called themselves) planned to travel to Vermilion to search for gold, but they also had plans to live there and “civilize” the place. Many of them were Civil War veterans who had muster pay to fund their venture. Newson, who served as a Major in the war, ran operations much like the military with an ordered chain of command.

One wonders now if these men really knew what they were getting into, for they departed on December 26, 1865, in the dead of winter. The group encountered dense forests with only a wilderness trail, deep snow drifts and temperatures well below zero. But the Mutuals, especially Newson, were so sure they would be successful that they pressed on and arrived on March 6, 1866. Newson summed up their journey for the St. Paul Pioneer:

The work of cutting a road was one of greater magnitude than the reader will imagine. Nearly the whole force of the Mutuals were engaged in it, and day after day from dawn to dark, slashed away at the big trees in their road, scarcely any of them less than a foot thick. Of course slow progress was made, and many discouragements met with, but they pressed on perseveringly and undaunted, and finally reached the end of their route safe and sound . . . No accidents happened to any of them on the entire trip; and every man was tougher, fitter and heavier than he had ever been before.

While waiting for the spring thaw, the Mutuals began planning their town. By April, Winston City had about three hundred men, two stores, several houses, a city hall which doubled as the company’s headquarters, and several saloons. The Mutuals weren’t the first to arrive, and their presence and persistence in quickly establishing their city was met with some opposition. One of their opponents referred to Newson as “Generalissimo High Cochilorun Chief”.

Gold discoveries often brought out the worst in people, however, and it became necessary to set rules of conduct. As the weather changed and became more spring-like, the winter snows melted, which in turn brought muddy, swampy conditions and mosquitoes. Those conditions also made it especially difficult for supplies to be transported to the area.

By summer there were as many as five hundred men in the area and miners were working all around the area. It appears, though, that the work proved to be more difficult than most imagined. A full day’s sweat and toil may only have yielded precious few inches toward their goal. Even with less than encouraging results, the Mutuals continued to issue optimistic reports. However, as winter approached the realities of facing a harsh winter in such a remote location without tangible results caused many of the Mutuals to abandon the project and return home.

When the next spring arrived, some prospectors returned, although not in the numbers seen in 1866. It wasn’t even news any longer as newspapers had very little to say about the Vermilion “gold rush.” By 1868, what “rush” there had been was over.

Afterwards, critics claimed there never was any gold at Lake Vermilion, although Henry Eames had been so sure that gold did indeed exist there. Since early on he sought to profit from the government-funded survey, perhaps greed was part of the problem. After all, the original purpose of the survey had been to approximate the iron ore potential of the area, not the discovery of gold or other precious minerals. Their hopes and desires for fortune were likely influenced by the wildly successful gold rushes out West. However, prospecting gold in California with a pan down by the river was infinitely less physical work than what miners encountered at Vermilion.

Later, iron ore would indeed be discovered, as it turned out, by miners on their way to find gold.