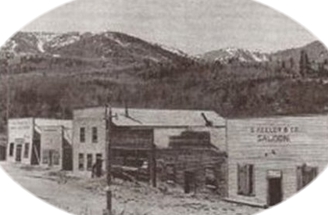 Kimberly, Utah, located in the northwest part of Piute County, began to be settled in the 1890’s.  In 1888 prospectors came to the Tushar Mountains to find a storied lost mine called “Trapper’s Pride.”  It may not have been the mine they were searching for, but the men discovered two large veins of both gold and silver and founded the Gold Mountain Mining District in April of 1889.

The Annie Laurie Mine, named after Newton Hill’s daughters, was opened in 1891 and became one of the most productive in the mining district.  Another prospector, William Snyder, developed the Bald Mountain Line.  The town site he founded was first called Snyder City, later changed to Kimberly after an investor from Pennsylvania, Peter Kimberly, bought the Annie Laurie and other area mines.  He combined all his holdings into the Annie Laurie Consolidated Mining Company and constructed a cyanidation plant to process the gold. 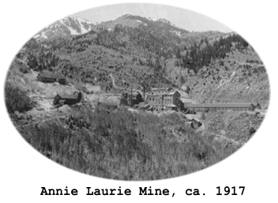 With the mill in place and the abundance of gold, silver and other precious metals, Kimberly began to boom. The town was divided into Lower Kimberly and Upper Kimberly, the lower part being the business district and the upper residential. In the book A History of Piute County by Linda King Newell (1999), Lower Kimberly is described:

Its main street twisted like a horseshoe around the contour of the canyon. Lower Kimberly had a post office, school, dance hall, doctor’s office, two or three general stores, several “specialty” shops, a slaughterhouse, three livery stables and as many saloons, two hotels, two barbershops, two boardinghouses, a dairy, and two newspapers, the Free Lance and the Nugget. The jail, one of the few brick structures in the town, stood toward the back of the small bench that provided a level area for some of the buildings. Inside were two iron cells, with only enough room on the front for the doors to open without hitting the wall. Those who supposedly knew said it was the strongest jail within a hundred miles.

A good jail was a good idea, since like many other mining booms town, it was a wild and woolly place. In 1900 the Gold Mountain School District was established and a school was built. Because of deep winter snows (the town was situated at approximately 9,000 feet), children attended school from April through November. Enrollment was at its highest in 1903 with 89 students.

The early 1900’s were the most productive for the area mines. After the cyanide mill was built in 1902, two hundred and fifty tons of ore could be processed in one day. Gold from the mines was shipped by stagecoach in bars measuring 6x10x10 inches and valued at over $20,000 each. The bars were stacked on the floor of the coach, between passengers’ feet, and of course, an armed guard always accompanied each shipment.

By 1902 the Annie Laurie alone employed three hundred miners, paid three dollars a day, and Kimberly’s population rose to five hundred. That year Peter Kimberly was said to have had an offer to sell out for five million dollars. By 1905 the mine was at its peak production level running three shifts, seven days a week.

Entertainment wasn’t lacking in Kimberly. The dance hall, built by the mining company, had one of the finest dance floors in the state. A young doctor, J.S. Steiner, established his medical practice by charging each family one dollar a year. If services were required, no additional fees were collected. There was constant traffic up and down the mountain roads carrying gold to the railroad at Sevier and supplies into Kimberly.

The town would begin its decline, however, in 1905 when Peter Kimberly died. The company was sold to a British company which lacked experience in managing mining operations. When the new owners instituted a scrip payment system, redeemable only at the company store, miners began to quit. The new company plunged into debt after building a new mill, followed by the Panic of 1907 which brought even more financial uncertainty.

In 1910 the Annie Laurie Consolidated Mining Company declared bankruptcy and with mine closure the demise of Kimberly soon followed. That year’s census enumerated only eight residents. The following year the company’s property, worth millions, sold at auction for a mere $49,000. Three men maintained the tunnels and buildings for a time for the new company, Sevier-Miller Coalition Company. In 1931, more workers were hired to remove a large block of ore. However, by 1938 the gold and silver were depleted and the mines were permanently closed. By 1942 most buildings had collapsed or were moved elsewhere.

One notable person born in Kimberly in 1905, Ivy Baker Priest, served as President Dwight Eisenhower’s Treasury Secretary from 1953 to 1961. She was the mother of Pat Priest, the actress who played Marilyn Munster on the television show The Munsters.