The surname Starbuck is believed to have Scandinavian origins.  Norsemen (Vikings) came down to Scotland and Ireland between 800 and 1100 A.D. to plunder and terrorize.  After a time these Vikings intermarried with women of the villages and later plundered along the coast of England.

According to Alexander Starbuck’s History of Nantucket, “the name Starbuck is Scandinavian and signifies a person of imposing appearance, great or grand bearing.”  In the Patronomyca Britannica there is a Norse name which is pronounced “Stor bokki”.  “Stor” means great (body, soul and spirit) and “bokki” means great man (one with higher status and ranking).  The spelling variations for this surname include “Starbocki”, “Starbock”, “Stirbock,” “Stalbrook”, “Sturbock”, “Styrbuck”, just to name a few.  One family historian suggested that “Starbuck” was finally settled upon because it was easier to pronounce: “Stah’buck”.

Edward Starbuck was born in Derbyshire or Attenborough, England in 1604. He married Katherine Reynolds and came to New England around 1635. He arrived in Dover, Massachusetts (now New Hampshire) and became a prominent member of that town. His name can be found multiple times in New Hampshire court records, as well as histories of Nantucket Island.

In 1648, Edward appeared before the court grand jury and received a fine for “disturbing the peace of the Church” and “denyeing to Joyne with the Church in the ordnance of baptisme.”

Along with Christopher Lawson who was guilty of stealing a bottle of wine from a neighbor’s cellar, Thomas Williams “for a fame of committing fornication with Judith Ellyns of strawberey banke” and John Batten for “beinge disteinged with drinke & for fighting & quarreling upon the lords daye”, Edward Starbuck was punished for his religious beliefs.

Notwithstanding his religious beliefs and the persecution he suffered, it appears that Edward was a highly respected citizen of Dover. In 1643 he was elected the first General Representative from Dover to the General Court of the Massachusetts Bay Colony, and again in 1647.

Edward and Katherine had six children: Nathaniel, Sarah, Dorcas, Abigail, Esther and Jethro. Jethro died at the age of twelve, so Nathaniel was the only son to carry the Starbuck line forward. In the summer of 1659, Edward accompanied Tristram Coffin and Isaac Coleman for a visit to the islands off the coast of Massachusetts.

Nantucket Island had been discovered in 1602 by Bartholomew Gosnold and claimed by England as part of the colonies. Thomas Mayhew purchased the island in 1641 for forty pounds, using the land to graze his sheep. He and Peter Folger were also able to convert some of the Indians to Christianity. The island was sold to nine men: Tristram Coffin, Richard Swain, Peter Coffin, Stephen Greenleaf, William Pike, Thomas Macy, Thomas Barnard, Christopher Hussey and John Swain. Edward and his son Edward were chosen as associates and became part of the ownership of the island. In 1671, Edward and his son Nathaniel participated in negotiations with the Indians in purchasing more land.

While some have hypothesized that Edward migrated to Nantucket because of religious persecution, it’s just as likely he moved there to pursue business interests. In October of 1659, at the age of 55, Edward accompanied Thomas Macy to Nantucket where they spent the winter. In the spring of 1660 he returned to Dover and brought his family, except daughters Sarah (Austin) and Abigail (Coffin) who had married and settled in Dover, to the island. As in Dover, Edward was a well-respected citizen of the island. He returned to the mainland at least one more time to bring other families to the island.

Edward Starbuck died in 1690 on Nantucket Island. His son Nathaniel was the beneficiary of most of Edward’s property.

Nathaniel was the only surviving son of Edward and Katherine Starbuck. Thus, he is the ancestor of all American Starbucks. Nathaniel was born in either 1635 or 1636 and where he was born likely depends on exactly when Edward and Katherine arrived in Dover. Other than accompanying his parents to Nantucket, not much is known about his early life. He married Mary Coffin, daughter of Tristram Coffin, in 1662 and they had ten children, two of them dying in their youth. Their first child, Mary, was the first English baby born on Nantucket Island.

Nathaniel did quite well for himself and increased his business holdings and land after being the beneficiary of Edward’s possessions. He and Mary ran a store which sold items such as molasses, rope, powder, rum and beer. It appears that Mary was a shrewd businesswoman, keeping a detailed account book. Her account book emphasized the potential “benefits of the English economic system” to the Indians who lived on the island. 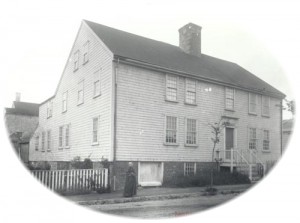 In 1699, Nathaniel built a home which came to be known as the Parliament House. Sometime in the early 1700’s, Quaker missionaries arrived on the island and Mary became interested in their faith. Mary’s opinions and advice apparently carried a lot of weight on the island. According to The Coffin Family: The Life of Tristram Coffyn:

She was consulted on all matters of public importance, because her judgment was superior, and she was universally acknowledged to be a great woman. It was not that her husband, Nathaniel Starbuck, was a man of inferior mould, that she gained such prominence, for he was a man of good ability; but because of her pre-eminent qualifications that she acquired so good a reputation, whereby her husband’s qualifications were apparently lessened.

John Richardson, a minister, said about her, “[T]he islanders esteemed her as a Judge among them, for little of moment was done without her.” When she became interested in the Quaker faith in 1701, she subsequently took on a significant spiritual leadership role.

Nathaniel and Mary opened their home to the Friends where their meetings were held beginning in 1708 when the Nantucket Meeting was established. Mary wrote the quarterly epistles and also preached. She served as an elder and her son Nathaniel, Jr. served as clerk. John Richardson wrote of Mary that “she submitted to the Power of Truth and the Doctrines thereof and lifted up her Voice and wept.” On that day two hundred people attended the meeting and many were converted.

Mary died on November 13, 1717 and Nathaniel died on February 2, 1719 (although one account lists his death on August 6 of that year). They are buried in the Friends Cemetery, although there are very few headstones – apparently Quakers disapproved of them, considering them idolatrous.

Later, some of the Starbucks became whalers. Interestingly, one of Herman Melville’s Moby Dick characters was a chief mate named Starbuck, a Quaker.