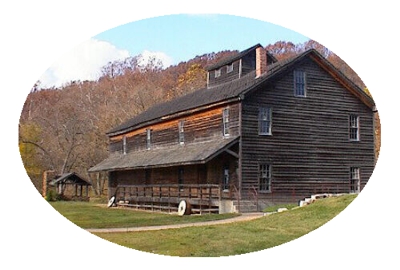 On September 4, 1848, a forty-acre tract of land in Newton County, Missouri was sold by Frederick Hisaw to John and Thomas D. Isbell for $300.  Upon this land the Isbells built a distillery and grist mill (Jolly Mill), perhaps with slave labor, according to local lore.  In the 1840 census, Thomas Isbell owned four slaves, but one family history indicated that his slaves were not skilled at carpentry, so slaves belonging to neighbors were used.

By the 1850 census, John was listed as a “distiller of spirits” and the value of his property was $5,000 (quite an appreciation!).  Thomas was nearby living as a farmer with a property value of $1,500.  In March of 1852, Thomas and his wife Rebecca sold their portion of the land to John for $2,000, perhaps retaining a small plot for themselves.  Thomas died in 1855.

By that time, a small town had sprung up around the mill and the town was named “Jollification”. Listed on the 1850 census were carpenters and masons, so perhaps these individuals helped build the town. On the next census, John’s neighbors were merchants, grocers, clerks, millers and blacksmiths, indicating the town was well-established by 1860 – three general stores, dram shop, blacksmith shop, post office and church. Wagons headed to southern Kansas and the Indian lands beyond came through Jollification, a place to rest and restock supplies – and what frontiersman could resist some “spirits”. John Isbell was said to be one of the wealthiest men in the county.

In addition, John owned eight slaves in 1860. There were over one hundred slave owners in Newton County in 1860, and of course, slavery was a hotly debated topic at that time. The 1820 Missouri Compromise was repealed in 1854 as part of the Kansas-Nebraska Act and the nation was about to explode and split apart.

So as the Civil War neared, John Isbell was said to be quite wealthy – but then something curious and unexplained occurred. No one seems to know just why, but John mortgaged his property (totaling approximately $13,000) and left the area. In 1870, John was enumerated in Newtonia, Newton County, Missouri as a “retired manufacturer” at the age of 52. By 1880 John, at the age of 62, was again a miller. There were quite a few battles fought in Newton County during the Civil War. Newtonia was the site of two significant battles, one in 1862 and the other in 1864. The Second Battle of Newtonia was the last major battle fought west of the Mississippi River.

Some of the village of Jollification was burned, according to some accounts by either “baldknobbers” or “bushwackers” (vigilantes). However, the distillery was spared. Other activity recorded in Jollification during the war consisted primarily of merely “passing through” Jollification, although a few incidences occurred in 1862. On May 7, 1862 a rebel was killed in Jollification, in July a Missouri Cavalry unit (Union) killed 10 guerillas and on October 3, after the first battle of Newtonia, several Union prisoners were held in the Jollification blacksmith shop.

After John Isbell left, the mill and distillery had fallen into disrepair from neglect. After the war ended, George Isbell (perhaps a cousin of John’s) purchased the property for $200 at an auction. George had the property repaired and began to operate the mill and distillery once again. In 1875 George ceased operations of the distillery in protest of Federal taxes on whiskey, but continued to operate the mill until 1894 when he sold it to his nephew George Isbell Brown. The mill site would be referred to in Newton County records as the “Jolly Mill place”. George Brown may have planned improvements on the property but he sold it in 1895 to A.C. Lucas and Son who called it “Jolly Rolling Mills”. Ownership next passed to W.F. Haskins and in 1983 a nonprofit organization was formed to preserve the mill site. It was added to the National Register of Historic Places in October of 1983.

So how did the town gets its name? In the April 20, 1870 edition of the Neosho Times, the story is related how the editor of a rival newspaper learned about the town’s naming. The editor was told that a local man, Able Landers, would visit the distillery every Saturday. After he exchanged corn for whiskey he would gather the men around and call for a “jollification”. After drinking and fighting, the old man invariably using the word “jollification,” the name was applied to the town. However, the editor of the Times strenuously disagreed:

This statement in regard to the place getting its name is most assuredly erroneous, and not only that, but an outrage on old man Landers, who was one of the most high-minded, respectable citizens of the county, and was never known to come to town for the purpose of raising a jollification, which can be substantiated by numerous friends. Two fights only occurred near the distillery, neither of which he was involved in, and it is asserted by his friends that he had nothing to do with naming the place.

Jolly Mill Park is located about an hour southeast of Joplin near Pierce City, Missouri. Some artifacts and historic buildings, including the mill, remain. Looks like a beautiful place to visit!