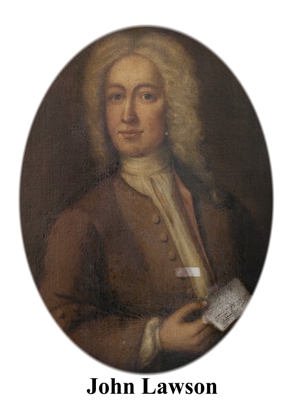 The Lawson surname has “truly ancient origins”, according to The Internet Surname Database (ISD).  Originating in the Holy Land, it was brought back to England and Scotland by the crusaders of the twelfth century in the form of “Lawrence”, and the baptismal name “Lawson” means “son of Lawrence”.  The earliest form of Lawrence used was simply “Law” and considered an endearing name.

According to ISD, there were at least seventeen coats of arms and all could be traced back to Richard III and “The War of the Roses”.  The arms suggested a “loyal person who lived by the sword, having no estates to support him.”  The Lawson surname appears to have been localized in the north, specifically Yorkshire, Lancashire, Cumberland and Westmorland.

The names of Christopher and Thomas Lawson are found on a list of names of individuals living in Virginia on February 16, 1623. This was an important census, for on March 22, 1622 the Jamestown Massacre had occurred, and approximately one-third of the settlers of Jamestown were killed in a series of surprise attacks by the Powhatan Indians. Following are stories of other early and notable American Lawsons and a nineteenth century Lawson with an interesting background as an aviation pioneer and the founder of his own religion.

Epaphroditus Lawson was the son of John and Sarah Rowland Lawson. His exact date of birth is unclear – ranging from 1600 to 1610 according to most sources. It appears that Epaphroditus and his three brothers, Rowland, Richard and Christopher (not sure if this is the same Christopher mentioned above) all immigrated to America.

John Lawson was born in England on December 27, 1674 to parents John and Isabella Love Lawson. John Lawson was highly educated, likely schooled by the Anglicans and later at Gresham College near the family home in London. A friend later encouraged John to travel to America, suggesting that Carolina was the best country to visit. James Moore, a resident of Charles Town, who was in London at the time seeking the governship, granted John free passage on his ship. They arrived on August 15, 1700.JohnLawsonOn December 28, 1700 he set out on a 57-day expedition of the Carolina back country, accompanied by five other Englishmen and four Indians (three men and one woman). He possessed a keen eye for details and recorded a vast amount of information during his journey.

After traveling about 550 miles he came to the Pamlico region, and there he built a house and continued to explore. Later he helped found the town of Bath, established on March 8, 1705 by an act of the General Assembly, and becoming North Carolina’s first incorporated town. He was one of the town’s first commissioners and helped layout the town.

In 1709 John sailed back to England to oversee the publication of his extensive journal, A New Voyage to Carolina. In the book he included his journal notes, observations of the Native American population and drawings of animals and native plants. 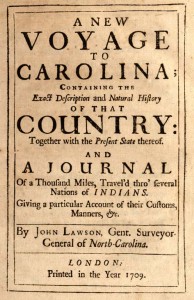 John Lawson had also co-founded the town of New Bern with Christopher deGraffenreid. Arriving back from England on April 27, 1710, he brought with him three hundred Palatines who would settle the town of New Bern. Relations with the Indians were deteriorating, but John proposed a trip up the Neuse River in the summer of 1711 to see how far the river was navigable and whether it might lead to a shorter route to Virginia. John assured deGraffenreid that they would be safe.

When they came upon the Indian village of Catechna, they were captured. The Indians refused to release them, thinking that deGraffenreid was the Governor – an important capture. A late-night dispute arose as to whether the prisoners should be bound, but since a trial hadn’t been held as of yet, Lawson and deGraffenreid were free to move about the village. The next day, the king of the village brought food, described by deGraffenreid:

Toward noon the king himself brought us some food in a lousy fur cap. This was a kind of bread made of Indian corn, called dumplins, and cold boiled venison. I ate of this, with repugnance indeed, because I was very hungry.

When the trial was held, Lawson and deGraffenreid were questioned as to the purpose of their journey and why they had not informed the king of their intentions. Apparently the king was upset that his people had been mistreated, specifically by Surveyor-General Lawson, but Lawson defended himself, and it was decided that the two prisoners would be set free the next day. The next day, however, Lawson quarreled with the king and according to deGraffenreid, “this spoiled everything for us.”

When they attempted to leave, they were seized, a council of war was held and both were condemned to death. deGraffenreid “turned toward Mr. Lawson bitterly upbraiding him, saying that his lack of foresight was the cause of our ruin; that it was all over for us; that there was nothing better to do than to make peace with God and prepare ourselves betimes for death; which I did with the greatest devotion.” When they arrived at the war council, deGraffenreid approached an Indian who he described as dressing like a Christian and speaking English. He took the Indian aside and persuaded him to plead his case before the chiefs. Lawson and deGraffenreid were “bound side by side” to wait the judgment of the council.

Christopher deGraffenreid’s pleas for mercy were heard and his life would be spared, “but the poor Surveyor-General would be executed.” How he was executed, deGraffenreid was not certain. Some at the time said that Lawson was killed by having his throat cut with a razor from his bag, others said he was hanged or burned.

Alfred William Lawson was born on March 24, 1869. During the early days of professional baseball, Alfred pitched around the league (Boston Beaneaters and Pittsburgh Alleghenys) but never made an impact. He managed in the minor leagues and founded his own league known as the Union Leagues of Professional Ball Clubs of America – it failed within one month.AlfredWLawsonAlfred’s next entrepreneurial endeavor was publishing an aviation magazine, “Fly”, to stimulate interest in aviation which was then in its infant stages. After moving to New York City, he renamed the magazine “Aircraft” and published until 1914. Alfred learned to fly in 1913 and eventually became an expert pilot. After advocating aviation for ten years, Alfred Lawson built his first airplane in 1917 and founded Lawson Aircraft Corporation.

Although he attempted to build a plane for military use (World War I), the plans fell apart. After the war, Alfred began a project with the goal of building the world’s first airliner. In 1920 an 18-passenger biplane airliner was demonstrated on a two thousand mile tour. The positive publicity allowed him to secure additional financing for his next project, a 26-passenger model called Midnight Liner. Unfortunately, on its maiden flight, the plane crashed and was never repaired. He later developed plans for a 100-passenger airline which was never built by his company. Alfred received the Winged America award later and cited by Scientific Age magazine as the “world’s leading passenger aeroplane builder.” 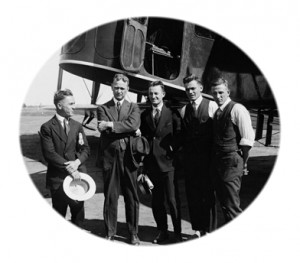 During the Depression years, he developed a theory of “direct credits” and wrote a book on the subject. He proposed that the government rather than banks should provide loans to individuals and businesses. Under his system, the people would have direct ownership of the money system.

The most interesting thing I found about Alfred Lawson, however, was that he founded his own philosophy or religion – Lawsonomy, which combined physics, religion and economics. He was a vegetarian who developed a theory which combined diet, hygiene, rest and exercise that he believed could potentially allow a person to live to the age of two hundred – he called it “Lawsonpoise”.

He lectured and wrote books which attracted a following, so much so that he decided to found a school. The University of Lawsonomy was founded in Des Moines, Iowa in 1943, and the first group of seventy students grew vegetables (eating them raw) and flowers and studied Alfred Lawson’s writings.

The state of Iowa had designated the university as a non-profit organization, but in 1952 the IRS disagreed and revoked that status and demanded payment of back taxes. Lawson closed the school. He died in 1954. Alfred Lawson was definitely “one-of-a-kind”, a person with some “far-out” beliefs. One science writer later remarked that Lawson was “one of the nation’s unintentionally comic figures.”