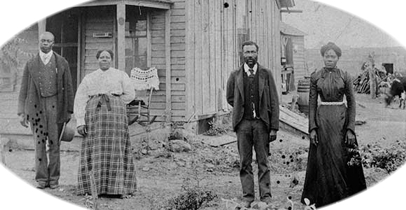 The American West has hundreds of abandoned ghost towns, but east of the Rockies some refer to towns that may still have a few residents as “quiet towns”.  These towns have diminished over the years as residents moved away to bigger cities, post offices and schools closed and buildings fell into disrepair.  Today’s ghost or “quiet” town has an interesting history with its founding in the post-Civil War Reconstruction years.

After the Civil War and Reconstruction, ex-slaves were eager to leave the South and strike out on their own in a new place.  In 1877 an Indiana land developer, W.R. Hill, and a black minister, Reverend W.H. Smith, formed the Nicodemus Town Company.  Smith became the town’s president and Hill the treasurer.  How the name of the town originated is not exactly known, although some believe it was named after a slave who came to America and later purchased his freedom.

Since January 2018 new articles are published in a digital magazine (PDF) available by individual issue purchase or subscription (with three options).  Most issues run between 70-85 pages, filled with articles of interest to history-lovers and genealogists — it’s all history, right? 🙂  No ads — just carefully-researched, well-written stories, complete with footnotes and sources.