The Pierson surname originally meant “son of Piers” –  possibly from French “Pierre” or “Peter”.  The Greek origin would be “Petros” or rock (in the Bible Simon was given the name “Peter” by Jesus).  The surname is of early medieval English origin with various spellings such as Pierson, Peirson, Pearson and even Parsons.  According to Lillie B. Pierson’s Pierson Genealogical Records (1878), “Pierson is considered to be the most correct manner of spelling the name, as deduced through the French Pierre.”

One of the first Piersons to immigrate to America in 1639 was Reverend Abraham Pierson, who had been ordained in the Episcopal Church in England. When Abraham arrived in America he was ordained in Boston as a Congregational minister. He lived in Boston before departing for Southampton, Long Island where he remained until 1647. He had first attempted to settle on the west end of Long Island, but the Dutch already controlled that end, so he went to the east end and founded Southampton.

The church that Abraham founded was Congregational but later became Presbyterian. Abraham was religiously staunch in his beliefs, so much so he believed everything in Southampton, even civic affairs, must be handled through the church. His congregation was divided on that sentiment and he left in 1647 to found the town of Branford, Connecticut. For almost twenty years he labored in Branford, ministering to the local Indians and learning their language. His work was lauded by the likes of prominent Puritan minister Cotton Mather – “wherever he came he shone.”

Abraham left Branford in 1666, taking most of his congregation with him to the banks of the Passaic River to found the town of Newark (perhaps named in honor of the town in England where he was ordained). The church they founded was the first in Newark and for twelve years Abraham faithfully led his flock until he died in 1678. His son, Abraham, was also a minister and the first rector and one of the founders of the Collegiate School (later Yale University). 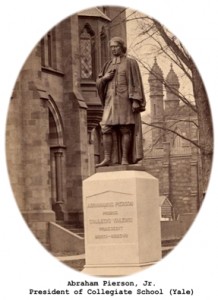 One of Abraham’s (Senior) great-grandchildren, whose father was also named Abraham, was named “Dodo” (b. 1723) and he was a deacon in the church. Family tradition says that a maiden aunt objected to the name “Dodo” being placed upon the child. She was overruled and later Deacon Dodo Pierson became known as a patriot. One account states that Dodo left his home in Killingworth, Connecticut and went to Rye in Westchester County, New York while the army was encamped there. It is not known his reason for going there, whether as a volunteer or to visit his son. Nevertheless, he took his musket and served as a sentinel even though he was advanced in age. 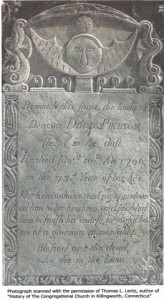 Henry Pierson had also settled in Southampton with Abraham and it is probable that they were either brothers or some other close relation. However, Henry remained in Southampton when Abraham moved to Connecticut, raising a large family, with some of them migrating to New Jersey later.

One of Henry’s grandsons, Azel Pierson, was born in Cumberland County, New Jersey and later became a doctor. Azel was well-educated and besides the medical profession he excelled in mathematics. He visited his patients on horseback and was especially fond of deer and fox hunts. He was known to be a bit uncouth in his mannerisms and speech, but still remained a well-respected physician and citizen who eventually became involved in politics, serving as county clerk while still practicing medicine. In 1813, Azel visited a patient who had typhus fever which he contracted and died from. The patient was a Christian, but Azel had made no profession of faith. One minister remarked, “what a happy circumstance it would have been if the patient and his doctor could have exchanged places… but our ways are not the ways of God.”

Thomas Pierson’s name was first recorded in the town of Branford, Connecticut when he married Maria Harrison on November 27, 1662. It is possible that Thomas was also Abraham’s brother (or possibly a nephew). Thomas was a weaver and when Abraham left Branford for Newark, Thomas was one of the signers of the heads of families in Branford to remove to Newark. Thomas became involved in civic matters in Newark, first as a townsman (1677), then a constable (1679) and grand juryman (1680). As the Pierson Genealogical Records notes, “[T]hus while Abraham led the band of emigrants in their spiritual interest, Thomas was active in discharging official duties.” He was a witness for Abraham’s will in 1668.

Many of Thomas’ descendants migrated to Orange, Essex County, New Jersey. Matthias Pierson was born in 1734 in Orange where he lived his entire life, marrying Phebe Nutman and having a large family of eight children. Matthias became a doctor who served his town of Orange and the surrounding area, traveling on horseback, and he was known to be a man of great integrity. He was concerned about the affairs of his town and was especially mindful of the need for proper education. Matthias was a patriot who rallied his fellow citizens. At one point, British soldiers entered Orange and took possession of his house (while the family had fled to safety in the mountains). The soldiers made use of his home, but left his closet of medicine and a fresh loaf of bread untouched. Matthias’ son, Isaac, was also a doctor who was especially skilled in the treatment of fevers. 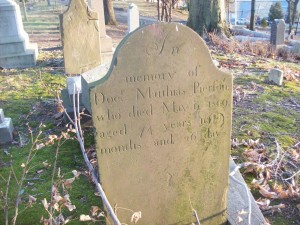 One branch of the Pierson-Peirson-Pearson-Person line emigrated to Philadelphia in 1699 as Quakers. Samuel Peirson and his family migrated to North Carolina and when the French and Indian War ended in 1763 he and all but two children are said to have been murdered by the Indians. His son, Samuel, was born in Philadelphia in 1731 and became a captain who sailed to China. Upon his return he was a businessman in Boston, who witnessed some of the first volatile events of the Revolution. The Boston Massacre was very near his home and one of the wounded fell on his doorstep.

There were other branches and lines of Piersons scattered throughout the colonies, and over time the Piersons made their way across America. For instance, the Quaker line that went to North Carolina from Philadelphia migrated to Randolph County, Indiana because of the slavery issue. Pierson occupations included farmers, hatters, tanners, weavers, doctors, missionaries, ministers and more. One Pierson family I came across in my research lived in Culpeper County, Virginia and will be the subject of next week’s Tombstone Tuesday article – triplets named Shadrach, Meshach and Abednego Pierson.