It appears the first Harpending in America immigrated from Neuenhaus, Netherlands and his name was Gerrit Hargerinck.  Gerritt arrived in America with his two sons in June of 1662 on the immigrant ship Hope.  Other iterations of the surname were perhaps Harbendinck and Hargerinck and finally Harpending.   At least one son of Gerrit’s, Johannes, had a son named John Harpending, so I assume that might have been the first usage of the Harpending surname.  A few stories of some of the early Harpending family members follow.

John Harpending, according to “A History of American Manufactures, From 1608 to 1860″, was a “worthy citizen” who “by assiduous industry in his trade of tanner and shoemaker, had acquired a respectable fortune, and whose moral and religious character procured him the highest esteem.” Harpending, along with other businessmen and trademen, purchased a large tract of land that was later donated to the North Dutch Church.

John married Leah Cossart in 1716 and one of his children, Hendrik, was born around 1720 in either New York or Somerset, New Jersey. Hendrik followed in father John’s footsteps and excelled as a tanner and shoemaker. He married Mary Coons in 1742 and their son Peter not only served in the Revolutionary War it appears that he served directly under George Washington’s command at the Battle of Monmouth (New Jersey).

Peter was a fiery patriot – he and fellow patriots of Somerset, New Jersey were labeled “arch-traitors” by British General William Howe, according to the Baker Family history blog. Peter operated a tavern and after the Declaration of Independence had been signed, a copy of it was read in his establishment to raucous cheers. According to the Baker Family site, Peter was a member of the Bound Brook Presbyterian Church’s “Radicals” – insistent on complete freedom from tyrannical British rule. Peter lived a good and long life, dying at the age of ninety-six in 1840.

In 1839 Asbury Harpending, Jr. was born to Asbury and Ann W. (Clark) Harpending. One family ancestry blog suggests that Peter and Asbury shared a common ancestor, Gerrit Hargerinck (Peter’s grandson was named Asbury, but this doesn’t appear to be the same person, however). According to Asbury, Jr., his father was one of the largest landowners in Kentucky. Young Asbury ran away from home to join General William Walker on an expedition to Nicaragua, but in 1855 his father sent him away to California where he accumulated a small fortune in the gold mining business.

Asbury Harpending, along with another Kentuckian, sought to halt California gold shipments to the United States Treasury and did his best to convince California to secede from the Union and join the Confederacy. Harpending was captured and detained at Fort Alcatraz to await trial. He was later found guilty of treason and served four months in a San Francisco jail, but in 1863 Abraham Lincoln pardoned him under the General Amnesty Act of 1863.

Asbury continued to build his gold mining business and helped found the company that sprung up as a result of what is now called The Great Diamond Hoax of 1872. He returned to Kentucky and built a $65,000 mansion to escape the embarrassing scandal. He left again in 1876 and until his death in 1923 he continued to pursue interests in California and the New York stock market. 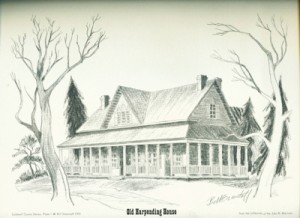 While the early Harpending family appeared to have been upstanding, industrious and patriotic, it’s not clear that Asbury Harpending, Jr. was entirely cut from the same cloth. He was very successful but his dealings came into question when he became embroiled in the diamond hoax. John P. Young, in his book “San Francisco: A History of the Pacific Coast Metropolis” calls Harpending a “scamp”, so I’m sure he found it very difficult over the remaining years of his life to avoid his name being associated with the scandal.