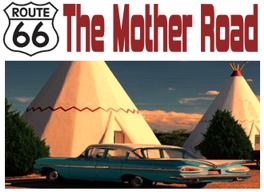 Route 66 – it was called “The Mother Road” – stretching from Chicago, Illinois to Santa Monica, California.  The 2448-mile road opened in 1926 and wasn’t completely paved until 1937, crossing eight states and three time zones.  The Dust Bowl refugees of John Steinbeck’s Grapes of Wrath traveled Route 66, songs were written about it (“Get Your Kicks on Route 66″), and a 1960’s television series was inspired by this iconic road.

Towns that had sprung up (or revived when Route 66 opened) were deserted when Route 66 began to gradually be replaced by more modern four-plus-lane highways, which became increasingly necessary as America became more prosperous and mobile.  In some towns there might be a building or gas station two and maybe a handful of residents, but in many cases little else remains except perhaps shells of long abandoned buildings.

It is said that the town of Ludlow died not once but twice, although today there are still a few remaining residents. Ludlow was founded in 1882 as a water stop on the Atlantic and Pacific Railroad (later taken over by the Atchison, Topeka and Santa Fe Railroad in 1897) and named after rail car repairman William B. Ludlow.

The town took off once gold was discovered in the nearby Bagdad-Chase Mine in 1900. The first samples milled from the mine yielded about $17,000 per one thousand tons of ore so mine production was stepped up. However, there wasn’t enough water at the actual mine to process the ore (Ludlow was famously short on water), so it had to be shipped out via the Ludlow-Southern Railroad, beginning in 1903. From Ludlow the ore was transferred to the mill at Barstow.

The superintendent of the Bagdad-Chase Mine declared the company town of Rochester (later named Steadman) as a “closed camp” – no women and no liquor! This gave Ludlow entrepreneurs a boost as miners came to town on Saturday night looking for entertainment. Most of the town of Ludlow was owned by the Murphy Brothers. Another entrepreneur, known as Mother Preston, owned several buildings in town, including a store, hotel, boarding house, saloon, café, pool hall and three homes. She was known to be a good businesswoman and an expert poker player – when she sold out to the Murphy Brothers, she retired to France.

When borax was discovered in the area, Francis Marion “Borax” Smith built a railroad which ran from Ludlow to Beatty, Nevada. The railroad, the Tonopah and Tidewater Railroad, was 169 miles long. Having three railroads running through Ludlow was a boon to the town – as long as the mines were operational – but as the saying goes “nothing lasts forever.”

In 1927-1928 the Pacific Coast Borax Company began shutting down operations so the need for the T & T Railroad declined, with the coming Depression hastening its complete demise. The railroad line ceased operations in 1933 and by 1943 the tracks had been torn up. The Ludlow-Southern Railroad had ceased operations in 1916, but apparently not because gold mining 0perations ceased. According to author David Myrick (Railroads of Nevada and Eastern California), from 1880 to 1970 the Bagdad-Chase mine produced half of all the gold mined in San Bernardino County.

After the two railroad lines ceased operations, Ludlow began to decline. Ludlow was revived when Route 66 opened and for awhile it thrived again. But, when I-40 was built and the town was by-passed, Ludlow died again. Today, remains of the first and second ghost town of Ludlow still stand: a shell of the Ludlow Mercantile Company (originally Mother Preston’s and then the Murphy Brothers), railroad tracks, a neglected and deteriorating cemetery and the old Ludlow Café. 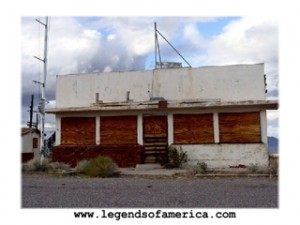