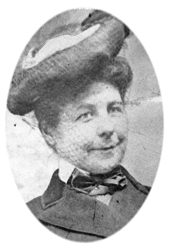 Wintry and snowy weather is upon us early this year and one of the most essential devices in our cars is the windshield wiper.  Alabama-born Mary Anderson was visiting New York City in 1902.  The weather was sloppy and wet and trolley car drivers had to keep the windshield down, letting the cold and blustery weather in to the discomfort of driver and passengers alike.

She wondered if there might be a solution and began to sketch a design while still on the trolley.  She returned home and after several attempts finally came up with a workable device – the wiper arms were made of wood and rubber attached to a lever near the steering wheel of the vehicle.  Pulling the lever would move the arm back and forth in a fan shape and clear away rain or snow.

On November 10, 1903 Mary was granted a 17-year patent for a “window cleaning device for electric cars and other vehicles to remove snow, ice or sleet from the window” – Patent No. 743,801: 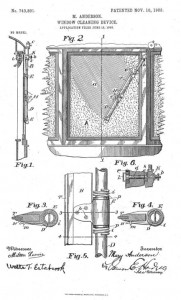 Mary attempted to sell the device to a Canadian manufacturer but was rejected – to them the device had no marketable value. In 1913, however, mechanical windshield wipers were included as standard equipment on all cars, but Mary Anderson never received any monetary compensation for her invention. In 1917 another woman, Charlotte Bridgewood, received a patent for the “Electric Storm Windshield Cleaner,” a device which used rollers instead of blades. Curiously, Charlotte’s daughter Florence Lawrence invented the turn signal. Charlotte, like Mary, never received any compensation for her invention.

Mary Anderson was born in 1866 on Burton Hill Plantation in Greene County, Alabama. Mary moved to Birmingham in 1889 with her mother and sister, and Mary and her widowed mother built the Fairmont Apartment Building soon after arriving in Birmingham. From 1893 to 1898, Mary lived in Fresno, California and operated a cattle ranch and vineyard. Mary Anderson remained single her entire life and died on June 27, 1953 at her summer home in Tennessee at the age of 87. 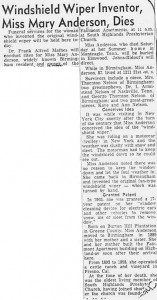 Interesting Update: This Fox News story mentions that the windshield wiper, invented in 1903, may become obsolete.