The Sparhawk family is one of the oldest and well-known in New England. Lewis Sparhawk, born in Dedham, Essex, England in approximately 1530, is the first English ancestor who can be connected to the American branch of the family line. Church records show that Lewis Sparhawk married Elizabeth Bayning in Dedham on February 17, 1560. Their children were named: Patience, Nathaniel, Daniel, Clement and Samuel. I noticed that the names “Samuel” and “Nathaniel” are common as the ancestral line progresses.

Samuel, son of Lewis, was born in Dedham in approximately 1565. His children were named: Daniel, John, Lewis, Nathaniel, Mary, Benjamin and Clement. Nathaniel, the fourth child of Samuel’s, was baptized on February 16, 1598 and the spelling variations surrounding the record of that event were: “Sparhawke”, “Sparhauk”, “Sparhauke”, “Sparohauke”, “Sparrowhauke” and “Sparrow Hawke”. Nathaniel(1) was the first Sparhawk emigrant ancestor of the American Sparhawk line.

Nathaniel(1) arrived in Cambridge, Massachusetts sometime in 1636 and was admitted as a freeman there on May 23, 1639.

To be admitted as a freeman had nothing to do with servitude in early colonial days, but simply that the person was then a full citizen and had the right to hold public office and participate fully in civic affairs, including payment of taxes. Qualifications included:

The Freeman’s Oath (in Modern English):

I ________being by gods providence, an Inhabitant, and Freeman, within the Jurisdiction of this Commonwealth; do freely acknowledge myself to be subject to the Government thereof: And therefore do here swear by the great and dreadful Name of the Ever-living God, that I will be true and faithful to the same, and will accordingly yield assistance and support there unto, with my person and estate, as in equity I am bound; and will also truly endeavor to maintain and preserve all the liberties and privileges thereof, submitting myself to the wholesome Laws and Orders made and established by the same. And further, that I will not plot or practice any evil against it, or consent to any that shall so do; but will timely discover and reveal the same to lawful Authority now here established, for the speedy preventing thereof.

Moreover, I do solemnly bind myself in the sight of God, that when I shall be called to give my voice touching any such matter of this State, in which Freemen are to deal, I will give my vote and suffrage as I shall judge in mine own conscience may best conduce and tend to the public weal of the body, So help me God in the Lord Jesus Christ.

Nathaniel(1) became a leading citizen of Cambridge and a deacon in his church. In 1642 records show he possessed five houses and five hundred acres of land (by his death he owned at least one thousand acres). In 1639 he was granted permission to sell wine and strong water. His first wife, Mary, died in 1643 or 1644 and Nathaniel(1) married Katherine ?. Nathaniel(1) died on June 28, 1647 at the age of fifty years; his wife Katherine died a week later on July 5. His oldest child, Nathaniel(2), was born in Dedham in approximately 1630 so he was possibly six years old when he arrived in Cambridge with his family.

Nathaniel(2) was also a distinguished citizen of Cambridge, serving as selectman for nine years, and as a deacon in his church. He married Patience Newman on October 3, 1649, she being the daughter of Reverend Samuel Newman (author of the Newman Concordance). Nathaniel(2) and Patience had seven children, two of them named “Nathaniel” – Nathaniel(3) died as a very young infant and Nathaniel(3a) was baptized on November 3, 1667. The other children born to them were: Mary, Sybil, Esther, Samuel and John (the subject of this week’s Tombstone Tuesday article).

Continuing where I left off Tuesday with Reverend John(1) Sparhawk, he and his wife Priscilla had two sons: John(2) and Nathaniel who were young children at the time of their father’s death in 1718. John(2) graduated from Harvard University in 1731 and became pastor of a church in Salem, Massachusetts. John, like his father, died in his forties on April 30, 1755.

John(1)’s youngest son, Nathaniel, was born on March 27, 1715 and later became a successful businessman in Boston. In the social circles in which Nathaniel moved, he met his future wife, Elizabeth Pepperell who was the only daughter of Colonel William Pepperell (later Sir William) of Kittery, Maine. Colonel Pepperell sent away to London for his daughter’s dress, the ceremony was held in Kittery and he gave the newlyweds a new home. Nathaniel’s brother John had this to say about his younger brother’s marriage (click to enlarge):

Nathaniel opened a mercantile house in Kittery but also continued pursuing his business interests in Massachusetts. In Kittery, Nathaniel participated in civic affairs, becoming a justice of the peace in 1744-45 and in 1746 he represented the town of Kittery in the General Court of Massachusetts Bay. Later his father-in-law was promoted to general and received the title of Sir William Pepperell, traveling to London to meet with King George II in 1749. Nathaniel, by this time, had also taken on the position of special justice in York and had turned over his business interests to a clerk. He had also received a commission and served as a colonel in the militia.

The French war was costly and taxes had been raised (as high as two-thirds of income), and in 1758 Nathaniel was bankrupt and experienced financial embarrassment. As a result of Sir William’s death in 1759 Nathaniel was appointed to fill the vacancy of justice of the Inferior Court of Common Pleas for York County, an office Nathaniel served in until 1772. Nathaniel died in Kittery on December 21, 1776, intestate. 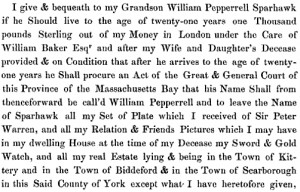 Thus in October 1774, William Pepperell Sparhawk assumed his grandfather’s name and title (Sir William Pepperell, Baronet). However, he soon fell into disfavor over disagreements with fellow colonists who were then beginning to contemplate breaking away from England (William considered himself a Royalist). To avoid conflict, William sailed to England (his wife died on the voyage) and was well received, later becoming one of the founders of the British and Foreign Bible Society. However, in 1778, back in America, he was officially banished. He died in London in December 1816.

This is just one fascinating branch of the Sparhawk family tree. Sparhawks continued to immigrate to America from England, settling throughout the colonies and beyond. By 1920 the Sparhawk name was most prevalent in Massachusetts and Pennsylvania, with five to eight percent of recorded family names in Ohio, Missouri, Wisconsin and Nebraska.