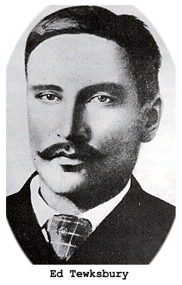 This range war conducted in the 1880s, sometimes called The Pleasant Valley War or Tonto Basin Feud, was anything but pleasant.   It turned out to be one of the more bloody and vicious feuds in American history, certainly in Arizona history.  So fierce and violent was this feud that Zane Grey memorialized it in his book “To the Last Man”. 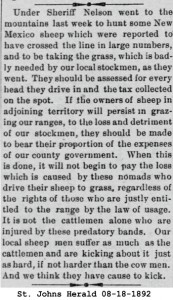 In the 1880s cattle rustling had become a huge problem in the area known as Tonto Basin, and the Graham and Blevins families were suspects. One of the first disputes arose when cattle belonging to James Stinson were stolen. As tensions escalated, the Tewksburys began to side with the sheepherders and protect the Dagg Brothers’ sheep. The conflict wasn’t just between the Grahams and Tewksburys – other ranchers had similar issues with sheep grazing on grassland meant for their cattle, so the entire valley eventually became involved. The deadly part, though, was between the Grahams and Tewksburys.

In February of 1887 a Navajo man who was employed by the Tewksburys was killed while herding sheep in an area known as Mogollon Rim – very close to the area where sheep were not supposed to be grazing. Tom Graham shot and killed the man and destroyed the herd of sheep. The bloody part of the war had begun.

Later that year in August, William Graham was shot and killed at his home, living long enough to identify Ed Tewksbury as his killer. Ed had already fled into the hills, but a trial was held despite his absence – even so the jury found him guilty. Just a few weeks later in September, John Tewksbury and William Jacobs were gunned down by the Grahams in front of one of their cabins. The Grahams remained and continued firing at the cabin for hours, stopping only when John’s wife came out with a shovel to bury the dead.

The Blevins family were drawn into the spotlight when Andy Blevins bragged around the town of Holbrook that he had killed Tewksbury and Jacobs. Holbrook Sheriff Commodore Perry Owens already had a warrant for Blevins’ arrest for cattle rustling so it seemed like a good time to go ahead and bring him in. On September 4, the Sheriff attempted to arrest Andy Blevins but Andy refused to interrupt his Sunday dinner. Andy’s half-brother John opened the door and took a few shots at the Sheriff, who immediately returned fire, hitting John and Andy both.

Fifteen year-old Sam Blevins shot at the Sheriff, as did Mose Roberts who was a Blevins family friend. The Sheriff escaped unscathed, but Andy and Sam Blevins and Mose Roberts were dead, while John Blevins was wounded. The gunfight made Sheriff Owens a legend, but it didn’t save his job – the county later fired him.

The feud finally came to an end when Tom Graham was shot in Tempe – before dying he identified the shooter as Ed Tewksbury. Ed was arrested and tried twice – the first trial resulted in a hung jury. In the second trial he was convicted but because of some legal technicality the verdict was deferred, and in 1895 the case was dismissed. So, Ed Tewksbury was the last man standing and he got way with murder not just once, but twice. I found a couple of stories about Ed tangling with bears and lions – if true, he was one tough hombre: 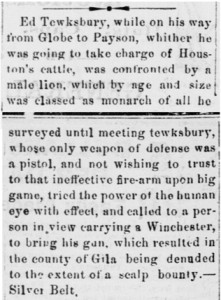