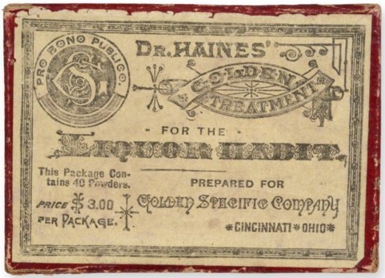 Before it became illegal to lie on the package label, this “cure” for alcoholism was called “Golden Specific” – later changed to “Golden Treatment” when the law went into effect.  Dr. James Wilkins Haines of Cincinnati, Ohio claimed his medicine was endorsed by the Women’s Christian Temperance Union and that by merely slipping a bit of it into the husband’s cup of coffee in the morning, the wife could cure him of his taste for alcohol.  According to Haines’ ads it was possible to cure one’s alcoholism in 24 hours!  (Click to enlarge the image) 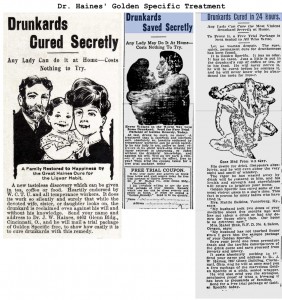 From the book Nostrums and Quackery, compiled by JAMA (Journal of the American Medical Association):

Any one with an elementary knowledge of the treatment of alcoholism knows how cruelly false such claims as these are. Not only is the statement that the stuff will cure the drunkard ‘without his knowledge’ and ‘against his will’ a falsehood, but it is also a cowardly falsehood in that it deceives those who in the very nature of the case will hesitate to raise any protest against the deception.

Notwithstanding the AMA’s point of view, Dr. Haines was probably seriously concerned with curing the alcoholic given the fact that he was a homeopathic physician, an educator, a spiritualist and a prominent Quaker minister. During his career he served as both President and Professor of Physics and Chemistry at Miami Valley College (Ohio), a Quaker institution.

In 1879 Haines was sued for malpractice and was also involved in a breach of marriage contract suit filed by Mary Bonner in 1878-1879. Haines eventually married another woman and paid Bonner $1,000 to settle the suit. The Society of Friends of Miami Ohio disowned him over his scandalous behavior; he later apologized and was eventually re-instated.

“The following acknowledgment has been read and accepted: Dear Friends: Having for some time past, engaged in a multiplicity of business as to be beyond my ability to meet promptly, all my promises ~~ And having, through unwatchfulness, become entangled in matters that have hindered my growth in the ministry, and brought reproach upon the Truth, I feel to condemn the same, and trust that Friends will overlook them, and restore me to the unity and Christian Fellowship of the Society ~~ James W. Haines (Minutes of Miami Monthly Meeting of Women Friends held 23rd of 7th mo. 1879, page 179, located in the Quaker Archive, Wilmington College, Wilmington, Ohio). “ (Quaker Genealogy in Southwest Ohio).

James Haines was the only child of Seth Silver Haines. After James invented “Golden Specific”, his father built a sanitarium in 1861 on the family property where the afflicted could come and be treated with the cure. Haines claimed the drug was odorless and tasteless so that indeed the cure could be administered without the loved one’s knowledge. According to the JAMA report cited above, an analysis of Golden Specific found it comprised of the following ingredients:

Capsicum – found in peppers, and as we all know, causes a burning sensation
Ipecac – typically used to induce vomiting
Alkaloids – from the Arabic translates to “ashes of plants”
Lactose – milk sugar
Starch – probably used to bind all ingredients together

So, basically the treatment was milk sugar, starch, capsicum and a minute amount of ipecac – hardly a cure for alcoholism or anything else for that matter.

The first treatment was “free” but one could pay $3.00 for the full treatment and receive a box of forty powders. With the “free” version of the treatment, folks were instructed to administer it surreptitiously. However, when payment was made for the full treatment the instructions were different – now they implied that the cure wouldn’t work as well unless the patient was ready to be cured and of his own free will partook of the cure. Furthermore, the woman who purchased the full treatment was admonished that “after patient has been under treatment for two days, give sponge (or towel) baths of warm salt water every three days for at least two weeks”. Of course, the caveat always was “if one treatment does not succeed, get another quick.” (Nostrums and Quackery)

Dr. James Wilkins Haines died in 1893 at the age of 44 following a brief illness. The obituaries written about him were filled with glowing praise:

He will be sadly missed in every walk of life. His mind was clear to the last moment and during all his sickness he expressed perfect trust in his Savior, and was anxious to depart and be with Him. During the last moments he assured his sorrowing parents that, standing on the brink of eternity, all was bright and peaceful beyond. The way seems especially dark to the saddened hearts of his devoted parents, who see no happiness in the years to come without the presence of their loved one. Mr. and Mrs. Haines have the sympathy of the entire community, who mourn with them. His funeral occurred on Tuesday, the 18th, at 1 P.M., at the home of his parents. (Quaker Genealogy in Southwest Ohio)

Apparently the company went on without him, however – the ads displayed above were posted in newspapers in the early 1900s. I found it a bit curious though that one of the ads was posted in the Deseret News, a Mormon newspaper.