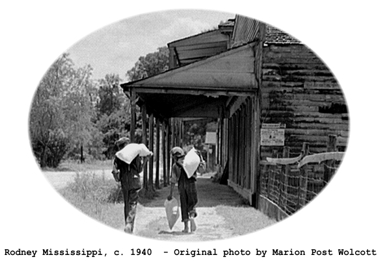 Once upon a time this ghost town came within three votes of becoming the capital of Mississippi.  Native Americans found it a good place to cross the Mississippi River long before the area was settled by the French in 1763, who named it “Petit Gulf”.  In 1781 the Spanish took control of West Florida until in 1791 they ceded the property to an influential Mississippi Territory landholder, Thomas Calvit.

As settlements were established in the area, Petit Gulf became an increasingly important port on the River.  In 1814 the town name was changed to “Rodney” in honor of Judge Thomas Rodney who had presided at the Aaron Burr hearing.  Dr. Rushworth “Rush” Nutt (see yesterday’s Tombstone Tuesday article about his son, Haller Nutt) was one of the early settlers in the area who wielded great influence through his agricultural innovations.Mississippi was admitted to the Union in 1817 and Rodney came close to becoming the capital of the newly formed state. In 1828 the town of Rodney was officially incorporated and population was on the rise in the area. Rodney boasted twenty stores, a church, newspaper and the state’s first opera house, and in 1830 Oakland College was founded nearby.

In 1834 the first town newspaper, The Southern Telegraph, a four-page weekly was printed on Tuesdays. The area had become so prosperous with cotton growing and commerce that General Zachary Taylor decided to purchase property south of Rodney, paying $60,000 for over nineteen hundred acres of land.

An epidemic of yellow fever struck in 1843, so severe that it felled local doctors and was reported in the Philadelphia Inquirer and National Gazette, as well as local newspapers (Mississippi Free Trader and Natchez Gazette on October 7, 1843):

“Rodney, Miss – This village, about 40 miles above Natchez, has been visited by the yellow fever. A number of deaths, and a still greater number of well marked cases have occurred – in consequence of which, we are informed by a Natchez physician and another Natchez gentleman who visited Rodney two days ago, the village is almost depopulated. Even the only Apothecary’s shop in the place is closed, as are all the stores. Of course, there will be no need of quarantining against a village having no business and no inhabitants.”

Four years later yellow fever struck again, but wasn’t as devastating as in 1843. By the 1850’s, Rodney was the busiest port on the Mississippi River between New Orleans and St. Louis. The population had increased to around a thousand residents and there were even more businesses, including two banks, a hotel with a ballroom, churches and schools. In the 1860’s Rodney grew to four thousand residents with ever increasing commerce.

Rodney saw some Civil War action in June of 1863 when about forty Union troops arrived in town to launch a surprise raid on Confederate troops in the area. When Vicksburg fell on July 4, the Confederacy was severed, and for the next two years Union troops patrolled the River, shutting down river traffic.

The USS Rattler gunboat was stationed at Rodney, but the crew was under strict orders of Navy Admiral David Porter to remain on the boat. The Rodney Presbyterian Church was pastored by a Northern sympathizer, Reverend Baker. The Reverend invited the ship’s captain, Walter Fentress, to attend a Sunday service – on September 13, 1863 the Captain, accompanied by a lieutenant and eighteen other soldiers accepted the invitation. Fentress and his men wore their dress uniforms and sat quietly with the congregation. Only one of the men was armed with a hidden revolver.

As the second hymn was beginning, Confederate Cavalry Lieutenant Allen walked up to the pulpit, apologizing for the interruption and announced the church was surrounded by Rebels and demanding the Union sailors surrender immediately. Second Assistant Engineer Smith drew out his hidden pistol and fired, hitting Allen’s hat. Congregants dove for cover and the Rebels outside began to fire through the windows. Seventeen Union troops, including the Captain and Lieutenant were captured.

As soon as those left behind on the Rattler heard of the commotion in town, they commenced to fire upon the town and church. Lieutenant Allen demanded that all shelling be stopped or else the Union troops in his custody would be hanged. The shelling stopped and afterwards the crew was derided for being the first ever ironclad gunboat to be captured by a small contingent of cavalrymen. The citizens of Rodney then formed their own military company and the Presbyterian pastor soon left town.

In 1864 Union troops were dispatched to destroy a rumored Confederate contingency in Rodney. Many houses and businesses in town were plundered. Even so, Rodney did not suffer as much as other areas of the South, but enough damage had been done to bring about the inevitable decline of the town. In 1869 the town was almost entirely consumed by fire, but even that devastating event wasn’t as decisive as the next “disaster” to hit the town.

In 1870, the Mississippi River underwent a transformation – a large sand bar altered the course of the Mississippi, and the river was now two miles west of Rodney so the town was no longer a port. The railroad bypassed the town, and with the fire damage of 1869 and the loss of river commerce, many residents began to leave. In 1930 the Governor of Mississippi issued an executive proclamation ending the designation of Rodney as a town.

Few residents remain in the area today, but the town was added to the National Register of Historic Places in 1980. Many original buildings are still standing, but are overgrown with vegetation, rotting and falling apart. The Presbyterian Church still stands and you can see the cannon ball hole in the front of the church.