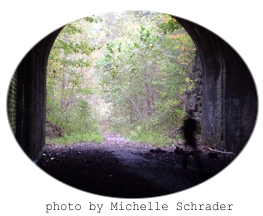 Not only is Moonville, Ohio a ghost town in the classic sense of the term (a once thriving town completely abandoned), stories abound about the haunting of various locales in and around the town.

No one seems to know where the town name originated, although some have theorized folks with the last name of “Moon” lived in the area, or that the railroad named the town in honor of a local grocery store owner.  The land upon which the town was built belonged to Samuel Coe.  Samuel was born on July 20, 1813 in Pompey, New York to parents Chester and Roxanna Coe.  The family eventually migrated to Ohio, where Samuel met and married Emaline Newcomb on August 27, 1836 in the Rome township of Ashtabula County.  Soon thereafter the Coes moved to Rue in Athens County.

Samuel’s uncle Josiah Coe had purchased land in that area of southeastern Ohio in 1803 so it’s possible that Samuel already knew of the abundant natural resources. At some point, Samuel purchased 350 acres in the Brown Township near where Moonville would eventually be situated. In the 1850’s, the railroads were beginning to boom and expand westward. One of those railroads, the Marletta and Cincinnati Railroad (M&C) had been experiencing financial difficulties and decided to offer stock subscriptions to encourage property owners to allow M&C track to be routed through their land.

Samuel Coe, in entrepreneurial spirit, offered to allow M&C to lay track through his property for free – the caveat being that he would have a railroad at his disposal to haul away the coal on his property to sell to the burgeoning coal markets.

The rail company was not in a great financial position at that time and had already made plans to lay track in another area, but the deal was so enticing that they agreed to Coe’s offer. In approximately 1856 the town of Moonville sprung up as a railroad town, surrounded by coal and clay mining operations. The town was never more than about one hundred residents, but it did have a school, cemetery, post office, store, train depot and a saloon. Homes were built up in the hills and hollows surrounding the town and for awhile the area boomed with mining production – even providing iron ore to build weaponry for the Civil War.

By the late 1880’s the M&C was bought out by the Baltimore & Ohio (B&O) Railroad. The town of Moonville gradually declined as natural mining resources were depleted. In 1947 the last family left the town and today all that remains are building foundations and the nearby Moonville Tunnel, which is the subject of ghost stories and legends.

The job of brakeman was one of the most dangerous in the railroad business. As the job title implies, they were responsible for helping the train brake, sometimes in precarious situations such as turns and downhill runs. In those railroad boom years, brakeman accidents and deaths were all too common. Some claim that they have seen a “ghost” walking along the tracks and under the tunnel, supposedly a brakeman:

The story of the engineer who died in the head-on collision of his train with another spawned a legend about a ghostly figure walking along the tracks carrying a lantern:

“A ghost (after an absence of one year) returned and appeared in front of a freight at the point where Engineer Lawhead lost his life. The ghost is seen in a white robe and carrying a lantern. “The eyes glistened like balls of fire and surrounding it was a halo of twinkling stars” – Chillicothe Gazette, 17 Feb 1895″

One of the more “colorful” ghost stories is the one about a man named David “Baldie” Keeton . He is said to walk above the Moonville Tunnel and toss rocks and pebbles below. Baldie was 65 years old and his death was of a suspicious nature. He was known as a brawler of sorts and one night he had stopped in at the local saloon on his way home. Trouble ensued and on his way home some have theorized that Baldie was attacked and murdered and perhaps thrown on the tracks where he was run over possibly by several trains … his body horribly mangled. If it was murder, no one ever confessed.

According to a web site devoted to Moonville and its history, there isn’t much left to see at the cemetery. Many head stones are missing (web site says that a custom was to take grave stones and use them for walkways and steps).

Directions to the ghost town of Moonville are here http://www.moonvilletunnel.net/Directions_To_Moonville.htm
should you ever find yourself in southeastern Ohio and up for a ghost hunt.