I was at the hair salon chatting with my stylist about “Tombstone Tuesdays”.  She mentioned that there were some cemeteries in Muleshoe, Texas (Bailey County) that might be interesting.  So, I looked up Bailey County and clicked on one of the smaller cemeteries (60 marked graves).

I clicked on the very first name on the list, S.A. Applin – not knowing whether this was male or female because only initials were on the grave stone (hand-etched it appears). 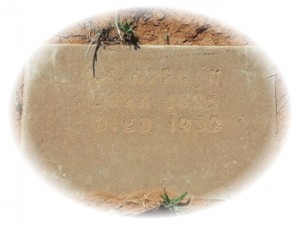 I had to enlarge the first picture by clicking to another page and was finally able to read the etching. There was only a birth year and death year… hmmm. This makes it a bit challenging to find information, and again I wondered whether this was a man or a woman.

I noticed also listed on the page were three children, so I surmised that S.A. must have been their mother:

Now I knew there must REALLY be a story to tell … three successive infant deaths! These children, however, were buried in a cemetery in Sharp (Milam County), Texas. 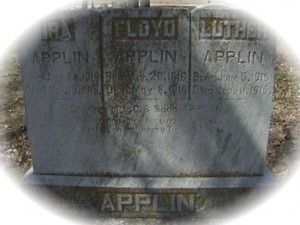 Still I didn’t know what “S.A.” stood for, nor her maiden name. You can barely see the inscription of the parents’ names so I just did a Google search of “S.A. Applin” and also a search at both Ancestry.com and Family Search. I finally found some census records with her name as Sadie and a death certificate for one of the children which listed her maiden name as “Brown”.

Her husband was Lee C. (Cisero) Applin. Now I had enough information to do some deeper digging. However, I didn’t have to search long before I found a large amount of family research already done on this family, including stories from one of their other children, Verna.1

I found out that Sadie (Sarah was here birth name) was one of three children of Charley Brown (who had been born in 1850 in France) – John, Charley and Sarah. Very interestingly, all three of the Brown children married three Applin children – all grandchildren of the same grandfather, George Applin. So, they were first cousins.

Luther was born on June 5, 1915 and died on June 10, 1915 of blood poisoning. Floyd was born on April 26, 1916 and died on May 8, 1916 of infant death (there’s a certificate number but I didn’t try to locate that). The source stated that Ira was born on July 24, 1918 and died on November 19, 1918 with no death record. However, I found a death certificate for Ira on Family Search and his cause of death was listed as “gastro-enteritis”. “Heredity Luco” (whatever that is) was listed as a contributing factor …. which again makes me wonder about the first cousin marriage angle.

I came across some posts on a message board on Ancestry which were discussing the Applin family. One person commented that the Rh factor would explain the early deaths of these children – something that was probably common with first cousin marriages and a medical fact unknown to them at the time. (Backing up just a bit – Lee was married three times. He married Ranie Nelson on March 6, 1910 and one child, Annie, was born on January 30, 1911. Ranie died not long after the birth of her child – because Lee married Sadie in 1913. Sadie died in 1932 and Lee married Winnie Harris in 1933.)

Subsequently, Lee and Sadie adopted two children Luella and Jack Lemmon and had a another child of their own, Verna Lee (born after the death of the three babies).

Apparently there were originally 550 acres owned by John Marion Applin. After he died the land was divided amongst his heirs. Lee inherited 80 acres. Lee’s land had a very low section where beautiful Willow trees grew. This is the area where the well was placed. The water was only about 5 feet below the surface. Verna remembers that when their neighbor’ wells would dry up during the summer, they would come to this well to get water.2

According to a granddaughter, Lee and Sadie were living in Baileyboro when his mother died in 1926, so sometime between 1920 and 1926 the family had moved to Bailey County. The granddaughter relates that Lee picked cotton in Progress, Texas (Bailey County) and then on to Baileyboro, where Sadie died in 1932.

According to Verna, her mother was a kind, hard-working woman. Here is Verna’s account:

I only remember my mother at a very young age since I was only 9 when she died. Sadie died of food poisoning 4-12-1932. The story is that Sadie, and others at that time, were trying a new method of “canning” using cans rather than jars. This proved to be fatal for some. Sadie was apparently tasting food as she was preparing dinner. The home-canned corn contained botulism, which made her sick immediately. This prevented others in the family from becoming ill. My Dad never forgave the doctor who attended Sadie that night. He was known as a drunk and he was apparently drunk when he tried to look after Sadie. Her death certificate contains evidence of this, as he was apparently so drunk he made a mess of the information. The certificate shows he scribbled over another woman’s certificate and put information in wrong. He put Lee Applin in the area marked for Sadie’s father, etc.

She was a very hard working woman, very kind, but could be strict when disobeyed. I remember my adopted sister, Luella, and I trying to keep Jack, Luella’s brother, from entering a room through a window. My mother had told us to stop and we disobeyed. I was pushed through the window and cut my back. However, that didn’t keep me from getting the strap along with Jack and Luella.

Another time I remember coyotes were trying to get the chickens out of the chicken house. Mom took the shotgun and went banging at them. I still don’t know if she killed a coyote or some of the chickens. Since my father was sick (gallbladder), she did all of the planting of cotton, maize, and corn. She also rode the cultivator that was pulled by a team of horses. We all picked cotton and cut the maize with a “hook bill” knife, then threw it onto the wagon that the horses pulled. I still have a scar on my thumb I received from a “hook bill” knife when I was carving something to shoot rocks with (a sling shot).

When mother had a bit to rest, she sat in a rocking chair and her dog “Brown Skinner” would jump in her lap. She loved to pet him. After she died, the dog walked through the house continually searching for her. He wouldn’t eat and he eventually grieved himself to death.

She always canned fruit and vegetables for us. I remember going to church in a wagon. I must have been real young. Later Dad drove a school bus and owned a Model T. Mother milked several cows. We separated the milk and sold the cream to buy groceries. She also raised baby turkeys. She treated them like babies. She was gentle and kind, and loving. She was really one of a kind.3

This article wasn’t much of a challenge to write, with all the recorded histories of family members, but a memorable one. As Verna relates, Sadie “was really one of a kind” – much loved wife and mother. 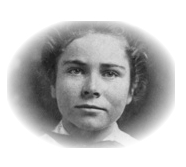