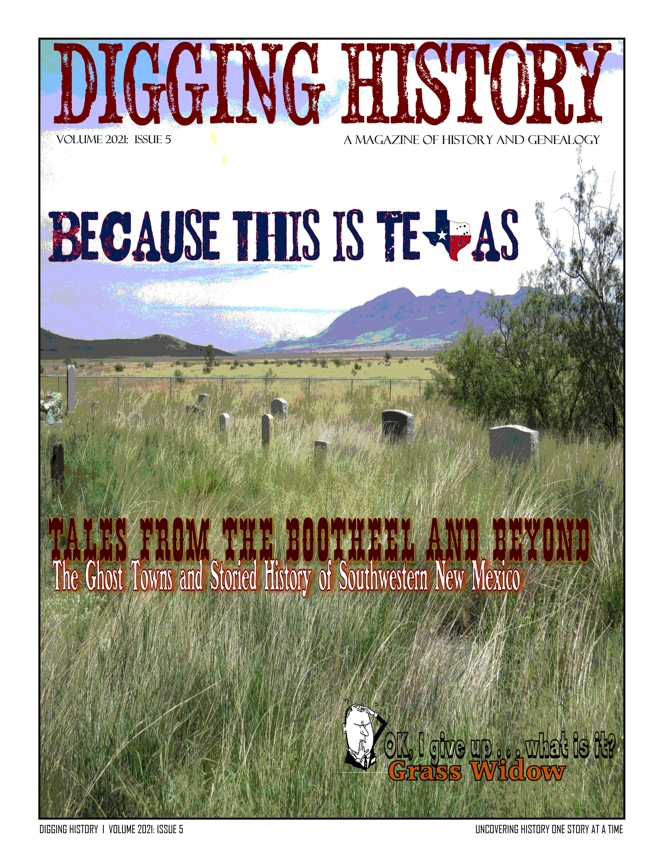 Happy Fall 2021! As I began to plan how to wind down the 2021 publishing year, I decided, after publishing four consecutive issues featuring Appalachian history, that I would tie up some loose ends – another “un-shelved” issue consisting of articles I haven’t been able to squeeze in for various reasons, or just ones I’ve been meaning to write.

The last issue featured Kentucky feuds and it reminded me of a Texas feud I’d written about several years ago. After uncovering more family history I decided to update the series, making it one long article. It’s quite a tale: “Because This is Texas”.

Another article I’ve been meaning to write is centered around one of those terms genealogists run across from time to time. What in the world is a “grass widow”? It has a long history – and lots of stories attached to the term which essentially no longer exists. It might just help solve a genealogy mystery!

The last two articles are “leftovers” from last year’s New Mexico two-part series. I simply ran out of time and space to include them. Also, I have long promised blog readers who stopped by to comment on my Cloverdale, New Mexico ghost town article that I planned to rewrite the article with additional research. What would scarcely fill a page of the magazine was significantly updated.

What a history this part of New Mexico has – gold, silver, copper, cattle ranching, Indian attacks, Mexican bandits and more. “Tales From the Cloverdale Cemetery” has also been significantly updated with stories which will give the reader a flavor of what life was like in “the least known, seldom visited part of New Mexico . . that southwestern tip of the state known as the Bootheel.”

I hope you enjoy this issue as much as I enjoyed researching and writing it!

Add a review for September-October 2021