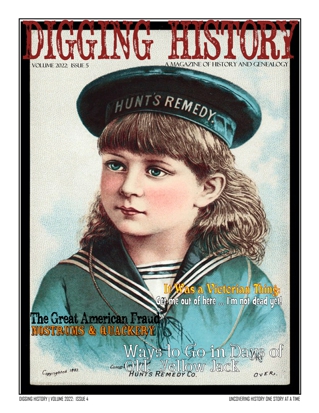 A one-time price of $5.99 will be added to your order.
10000000
Categories: Monthly Issues
Manufacturer: Digging History

Dear Reader,
This fifth issue of 2022 features articles which focus quite a bit on the Victorian Era, a favorite topic of mine. In this issue you will find the following feature articles:
● Ways to Go in Days of Old: Yellow Jack. One of the most dreadful of diseases plagued America for more than two centuries before a cure was discovered in the early twentieth century. The article focuses on three epidemics which devastated the populations of Philadelphia (1793), New Orleans (1853) and Memphis (1878).
● The Great American Fraud: Nostrums and Quackery. This topic has long fascinated me as to how so many people could be hoodwinked into thinking so-called patent medicines could cure alcoholism, for instance, if the formula included alcohol?!? This article takes a look at some of the more popular patent medicines of the nineteenth and early twentieth centuries. I always wonder if my ancestors took any of these “quack cures”. How about yours?
● It Was a Victorian Thing: Get Me Out of Here, I’m Not Dead Yet! This is a repeat of an article previously published in an issue featuring the Victorian Era. It seemed appropriate to include it in this issue as a companion to the “Ways to Go in Days of Old” article. The article includes some new examples of people actually being buried or “coffined alive”. Also, a bit about another Victorian practice – memento mori.
● The Dash: No Man’s Land. A look at the section of Memphis, Tennessee’s Elmwood Cemetery, named “No Man’s Land”, where many of the victims of the 1878 yellow fever epidemic were interred en masse.
Enjoy the issue! The final issue of 2022 will feature the Korean War and finding records of our ancestors who served, a look at old soldiers’ homes and more. And, 2023 will kick off with an extensive look at “The Roaring Twenties”!
As always, I am grateful for my faithful subscribers. You are a blessing to me!
Sharon Hall, Publisher and Editor

Add a review for September-October 2022