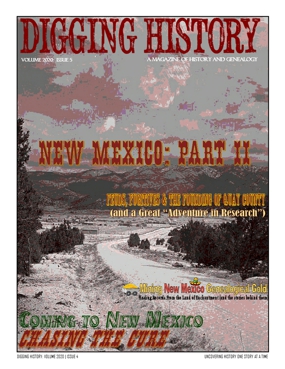 This issue features Part II of an extended series on New Mexico, it's history and how to find the best genealogical records.  Here's a synopsis:

Coming to New Mexico:  Chasing the Cure:  It was a dreadful, wasting disease – afflicting young and old, rich and poor. Sometimes called “the great white plague”, it was more commonly referred to as “consumption” or by its scientific name, “tuberculosis”, coined in 1834 by Johann Schonlein. . . Serious health seekers began to pour into New Mexico Territory with the arrival of the railroad, circa 1880. Newspapers touted the territory’s health benefits several years prior. Indeed, the military was well aware of the effects of New Mexico’s high and dry climate in treating tuberculosis, as was William Carr Lane. . . .New Mexico finally achieved its ultimate goal – statehood! – in 1912, along with its neighbor to the west, Arizona. The growth of the sanatorium-health industry helped fuel the state’s growth and, in significant measures, helped civilize a once wild-and-woolly place.

Mining New Mexico Genealogical Gold:  Finding Records From the Land of Enchantment (and the stories behind them):  One of the best aspects of publishing entire issues which focus on a single state is finding the stories, pictures and records which tell the real story. Last year I learned so much about the great states of Colorado and Kansas by digging around for some unique records, like the Colorado State Hospital records which told the stories of hundreds of people through newspaper snippets, or the Kansas Registration Affidavits of Alien Enemies obtained at the height of World War I.

Feuds, Fugitives and the Founding of Quay County (and a Great Adventure in Research!):  You might have noticed that I like to choose alliterative titles for my articles. The premise of this article began late last year when I received an email regarding a blog article I published in May 2014. It is one of the most commented-on articles at the blog – some visitors thanking me for the article and a few who wanted to “put in their two cents worth”. Family feuds are like that. Everyone has their own opinion about which side was right and which was wrong.

In this case it was known as the Spikes-Gholson feud. While the feud started years before in East Texas, it was later carried forward to West Texas and then into what would one day be Quay County, New Mexico. The email’s author, Kate, had come across the article and was intrigued because it mentioned an ancestor – a missing one. Henry Hawkins was the ringleader of a gang of bandits known as the “Mesa Hawks” and he was likely acquainted with the Spikes family. . .

My grandparents came to New Mexico and settled in San Miguel County, adjacent to Quay County, near a little place called Garita, about 56 miles west of Tucumcari. My dad and his twin brother were home-born, too remotely located to summon a doctor.

I’m sure my grandparents did business in Tucumcari and Las Vegas, county seat of San Miguel. I’ve heard stories about both but never knew much about the history of either county. Now that I’ve researched and written articles about this area, I have a better understanding of their challenges.

It just goes to show you how digging into the history of locales where our ancestors settled enhances our genealogical research. Finding dates and documents is important, but I always encourage people to take time to explore the history. There you may just find, for instance, why your ancestors came to (or left) a particular area.
In a nutshell, that is the objective of Digging History Magazine.

The Dash:  A.E. Sipe (1855-1909):  his updated article was first published on November 5, 2013 as one of the early “Tombstone Tuesday” posts at the Digging History blog. The column would become my favorite each week to research and write. However, since then I’ve honed my research skills considerably and have access to newspaper archives unavailable to me at the time. It was an article left dangling with no information as to how Adolphus E. Sipe had died since there was only a 1909 date. In addition, some of the information provided at Find-A-Grave has since been removed. An update, with additional research and local history, is definitely in order – I actually missed quite a bit of this family’s history (gave up?).   This article is an entire overhaul of the original article -- oh my, what I found with more extensive research!

The new research most definitely turned (and opened up) on utilizing a “back door” approach to locating the 1885 Territorial Census, after which family details began to roll out. A great adventure in research!

Also included: an extensive "Essential Tools for the Successful Family Researcher" and some must-read book reviews.

Add a review for September-October 2020