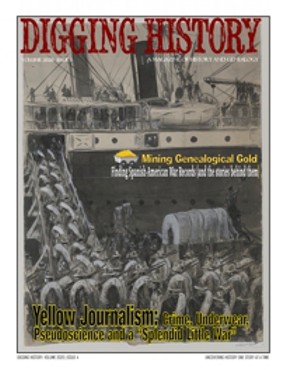 This issue features the Spanish-American War of 1898, what Secretary of State John Hay called "a splendid little war".  While it doesn't garner the attention that the Revolutionary War, Civil War and the World Wars generated, it is nonetheless an interesting period of American history.  There are more stories than you might think -- and genealogical records as well!  Here are some short excerpts:

Yellow Journalism:  Crime, Underwear, Pseudoscience and "a Splendid Little War:  You might be surprised to find, as you read this article, that it not only covers an era of late nineteenth and early twentieth century journalistic chicanery known as “yellow journalism”, but also encapsulates the focus of this issue – the Spanish-American War. For good or bad, the Spanish-American War is often considered a “journalistic war” Why is that? Because newspapers around the nation “blew up” after the USS Maine “blew up” in Havana harbor, demanding President McKinley act with a declaration of war.

First of all the term “blew up” in regards to the USS Maine is debatable. Yes, there was an explosion, but whether or not it was nefariously blown up by a Spanish mine was disputed for several decades. As Admiral Hyman Rickover noted in his 1976 book, How the Battleship MAINE Was Destroyed, it was just one of the events which propelled the United States into a direct conflict with Spain.

However, for publishers like William Randolph Hearst (New York Journal) and Joseph Pulitzer (New York World) it was a way to sell a tragedy and hype a misguided war – and not to mention, by the thousands, newspapers. Essentially, a circulation war between two titans of so-called “yellow journalism”, exploded into what long-time United States statesman John Hay called “a splendid little war”.

Mining Genealogical Gold:  Finding Spanish-American War Records (and the stories behind them):  Secretary of State John Hays famously referred to the Spanish-American War, a short-lived conflict in Cuba between the United States and Spain, as a “splendid little war”. Amazingly, however, given its brevity, there are a number of genealogical records to be gleaned. Most of the records featured in this article are from the Spanish-American War, but some may dovetail with the Philippine Insurrection which followed on its heels. In no particular order, here are a few (and the stories behind them).

Add a review for November-December 2020