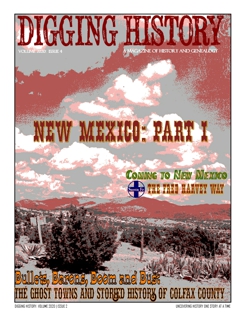 This issue is Part I of a two-issue series on New Mexico history.  The series begins with two extensive articles:

Bullets, Barons, Boom and Bust:  The Ghost Towns and Storied History of Colfax County: The history of Colfax County is a long and diverse one, boasting prehistoric “Folsom Man” among its first “pioneers”. Were it not for the sharp eye of George McJunkin, cowboy and ex-slave, the world would never have known of his existence. On August 27, 1908, following a severe thunderstorm which flooded and devastated the small town of Folsom, McJunkin was riding across Crowfoot Ranch when he espied a pile of bones exposed by flood waters cutting a sharp gash into Wild Horse Arroyo. . . . An extensive history of Colfax County from gold mining to coal mining, cattle barons, the Colfax County War and more.

Coming to New Mexico The Fred Harvey Way:  Following his death on February 9, 1901, tributes were printed in newspapers across the nation. Quite simply, “there [was] no name in America better known to travelers than that of Fred Harvey.” What he had accomplished was nothing short of amazing in the quarter century since convincing the president of the Santa Fe Railroad he could increase their business by ensuring passengers had access to fine dining while making their way across “the Santa Fe road”. Harvey did it by establishing (or taking over) eating houses along the Santa Fe line, “transform[ing] what [was] generally the worst place on earth to get a good meal into dining stations that are recognized as unequalled the wide world over.”   An extensive history of not only Fred Harvey, Harvey House and Harvey Girls, but the history of railroad towns across New Mexico from Raton and down the line to Las Vegas, Vaughn, Albuquerque, San Marcial and Deming.

The Dash:  Martin Van Buren Corn (1841-1915):  I came across the story of this New Mexico pioneer while researching a ghost town article.  In 1991, the Roswell Daily Record called his family one of Roswell’s oldest and largest.  Since the late 1870s several generations of this family have lived and thrived in the Pecos River Valley, and it all began with Martin Van Buren Corn.  This is a major update of an article previously published at the Digging History blog.

May I Recommend (Book Reviews):  Distant Bugles, Distant Drums: The Union Response to the Confederate Invasion of New Mexico; Dreams of El Dorado: A History of the American West; Killers of the Flower Moon: The Osage Murders and the Birth of the FBI; Blood and Thunder: An Epic of the American West; Butch Cassidy: The True Story of an American Outlaw

Essential Tools for the Successful Family Researcher:  Broken Links; Blame it on Indexing; ThruLines vs. True Lines (a review of a new Ancestry.com feature).