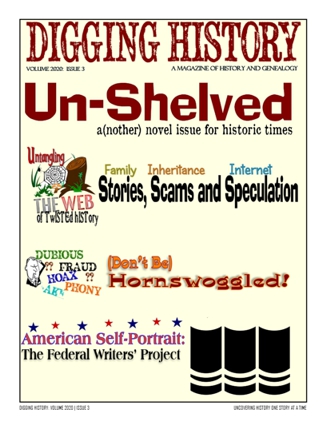 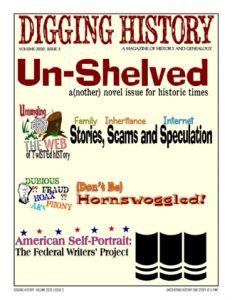 This issue of Digging History Magazine is themed (again) as “Un-Shelved”, stories which, for one reason or another, were pushed back from their original planned publication.  Included in this issue are three articles which have been extensively researched (in addition to regular columns (May I Recommend and Essential Tools for the Successful Family Researcher).  The first two articles are geared toward both genealogy and history — the twisted kind:

Untangling the Web of Twisted History:  Family Stories, Inheritance Scams and Internet Speculation:  One of my favorite maxims – “genealogy is not for the faint of heart” – is the underlying premise of this article (actually, pretty much the entire issue!), a collection of challenges I’ve run across in my “research adventures” in pursuit of my own family history or that of my clients. Genealogy is fraught with challenges and the all-too-often need to untangle twisted history, but untangle I must (or at least try!) – whether it’s a client with family lore they wish to prove (or disprove) to scaling brick walls built on years of misleading information via either genealogical fraud, inheritance scams or Internet speculation.

Don’t Be Hornswoggled!  Although no one seems to know the origin of the word, we hope most people know when they’ve been “hornswoggled”. Unfortunately, that’s not always the case in the age of modern genealogical research. It just isn’t the spread of Internet speculation, however. Some of the most dubious “documentation” comes from long-ago published (purported) works of history.

Not long after the “Buchanan Bubble” burst, a controversy arose following the publication of a distinguished-sounding historical work known as The Horn Papers. Almost anyone who saw the substantial three volumes entitled The Horn Papers: Early Westward Movement on the Monongahela and Upper Ohio, 1765-1795 lying on a library table probably accepted them as an unusually impressive collection of data on local history. The respectable bulk of the books the discreet gold lettering of the title on the back cover, given no hint of the furor excited by their publication. Everything about their external appearance is reassuringly undramatic.

Genealogists have, for better or worse, come to depend on these types of books as sources – perhaps not “gospel” but a source nonetheless.  Caveat Investigator.

American Self-Portrait: The Federal Writers’ Project:  When President Franklin Roosevelt took office in 1932 America’s social and economic structures were teetering on the brink of collapse. No one would dispute something drastic had to be done in order to pull the country out of the Great Depression. Whether or not some of his programs actually made a difference in the long run is still debated to this day. There are those who believe some of his programs unnecessarily drew out the process of recovery. However, one program certainly had an impact which still resonates today, especially for historians and genealogists.

The term “self-portrait” often evokes crude images of a self-sketched personage. It might not be pretty, but it’s how we see ourselves. It is what it is – and so it was with one very important Work Progress Administration (WPA) project conducted in Depression-era America. Since most of Roosevelt’s program were known by an alphabet soup of acronyms, let’s use “FWP” for The Federal Writers’ Project. Collections such as this one are a perfect example of how history and genealogy intersect – know your history, know (more about) your ancestors.