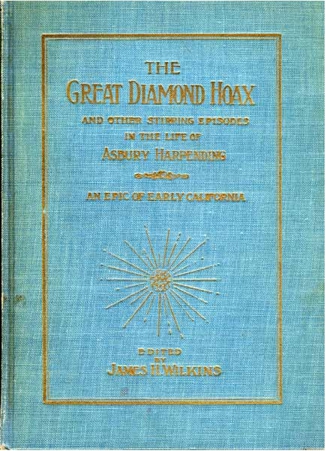 This story, without a doubt, has to be one of the most cunning and crafty hoaxes ever perpetrated on a group of learned men which included bankers, financiers and mining engineers.  It reads more like a Hollywood script than actual fact, but it’s all true and quite fascinating how it was pulled off.

In February of 1872, Philip Arnold and John Slack strolled into the Bank of California in downtown San Francisco carrying a canvas bag and purported themselves to be prospectors who wanted to deposit their treasures in the bank’s vaults.  The cashier demanded to see the contents of the bag and when the bag was opened discovered hundreds of uncut diamonds, sapphires, emeralds and rubies.  The bank’s founder, William Ralston, was called into check out the deposit — intrigued, he wanted to know more.

At first it appeared that Arnold and Slack were too shy or frightened to share details, but finally admitted that they had suddenly, after months of prospecting, discovered a hill where these precious stones were scattered. The location was some distance from San Francisco, although they declined to name the exact location. They claimed that the bag they brought to San Francisco was only a small portion of what they had actually found.

Arnold and Slack were pressed to reveal more details and finally agreed to take two diamond experts, blindfolded, to the location for inspection. The experts were sufficiently impressed, declaring that diamonds were found in cracks of rocks and glittering in dry stream beds. They brought back another bag of jewels equal to the first to deposit in the bank, assuming that the value was perhaps close to $250,000.

Banker Ralston was no fool (at least not yet) and he quickly formed a company – the San Francisco and New York Mining and Commercial Company. He persuaded several of the city’s most prominent businessmen to plop down $80,000 each to capitalize the new company to the tune of $2,000,000. When word began to spread around the country, normally rational people went crazy with the prospect of untold wealth via a mine in a yet undisclosed location. Ralston formed a board of directors which included General George B. McClellan, late of the Civil War and a financial “adventurer” by the name of Asbury Harpending. 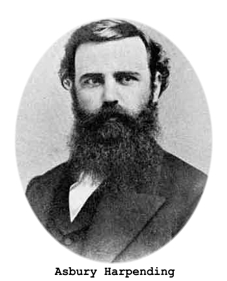 One of the next steps Ralston took was to solicit the opinion of famed jeweler Charles Tiffany. He sent two lawyers to New York for Tiffany’s personal assessment – Tiffany was sufficiently impressed that the stones were indeed real and the samples he saw were said to be worth $150,000. Ralston went a step further and hired mining engineer Henry Janin, an eminently qualified geologist who had surveyed hundreds of mines and had never once been wrong.

Janin was taken to the site by train (with the shades down) and then blindfolded and taken by mule to the remote location. Janin observed that the diamond fields were on the north side of a cone-shaped mountain – somewhat of an oddity in an otherwise flat landscape. He camped there and afterwards decided that the mine was indeed genuine. In his personal opinion, investors in the company would reap a fabulous financial windfall – he had also been given one thousand shares in the company and $2500 in cash as payment for services rendered.

Now investors far and wide wanted to seed their money into the company – Lord Rothschild of London was so intrigued that he offered to buy the company. Ralston opened up offices for the upstart company, and then suddenly Phillip Arnold and John Slack decided they would rather have guaranteed cash and walk away, leaving the financial machinations to Ralston and his board of directors. In exchange for the super-confidential map to the mine location, they were able to negotiate a sum of $300,000 each and a percentage of future profits. As author Simon Winchester (The Men Who United the States) put it, “[T]his last was purest cheek. For there would be no profits, nor would there be a company.”

The story was sweeping the nation and the world, for that matter. There were stories speculating the location of the mines (some thought Arizona). This article includes an offer of a route to the diamond fields. 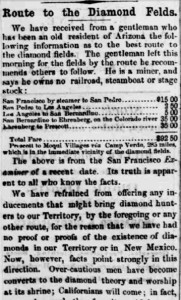 The story about the mine raised the eyebrows of one noted geologist, Clarence King, who had not long before finished an extensive geological survey of the West. King had never heard of all three precious stones (diamonds, rubies and sapphires) occurring in the exact same location – not that it couldn’t happen but it was highly unlikely. King had to know more details so he interviewed Henry Janin in San Francisco, demanding to know what the weather was like during the trip to the mine and once on the mules (Janin was blindfolded) which direction did he perceive they were heading.

Janin informed King that the weather was hot and miserable and once traveling on the mules, the direction the caravan headed was south. King simply could not believe the location was in Arizona because the train ride was at least thirty-six hours from San Francisco, and then required a two-day mule ride to reach the mine. Since King knew the West’s topography, geology and climate intimately, he deduced that the train probably went to Cheyenne, Wyoming before the two-day mule trek. Janin had also mentioned the cone-shaped mountain to King which was also vaguely familiar to him. Clarence King took the train to Cheyenne, and by interviewing various attendants who had observed small parties of men who would arrive in Cheyenne and then head south on horses or mules, he became more certain as to where the mine was located, or at least reasonably close.

It was October in Wyoming and the weather had turned cold. King and his group encountered adverse weather conditions. After about a week they reached the Colorado border and they noticed a cone-shaped hill in the distance. A sign nailed to a tree, signed by none other than Henry Janin, was posted claiming water rights to a nearby stream. This must be the place.

A short time later while walking along the ridge of the cone-shaped hill, they began to find several gems. Curiously, they didn’t find many diamonds but by the next morning they had found amethysts, spinels and garnets. King then found a diamond perched precariously on a slender rock – how in the world could the stone remained perched for hundreds of years? One story (not true as it turns out) was that one engineer cried out after finding a diamond that had been cut: “Look, Mr. King, this diamond field not only produces diamonds, but it cuts them also.”

Upon further observation King and his group discovered that every anthill on the ridge had a series of tiny holes, perhaps eight inches deep and made with a stick or some other instrument. At the bottom of each was a precious gem, obviously fraudulently “salted” there by whoever dug the holes. The bankers, financiers, mining engineers and even renowned jeweler Charles Tiffany had all been duped! As it turns out, Philip Arnold and John Slack had traveled abroad to London and Amsterdam and purchased the rough cut stones and rejects from unsuspecting gem dealers in Europe – with their own investment of $25,000. Newspapers around the world picked up the story: 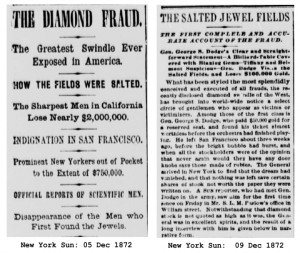 Henry Janin had wisely sold his shares before the fraud was exposed (possibly after having his serious discussion with King in San Francisco) and Charles Tiffany’s reputation didn’t suffer much it appears. The whole scheme did, however, eventually bring financial ruin to William Ralston. After paying back his investors his bank collapsed, and the next day his body was found in the San Francisco Bay. Some have speculated that Asbury Harpending was involved in the hoax.

As Harpending points out in his book, “The Great Diamond Hoax”, he actually was acquainted with Philip Arnold. Some historians believe he wrote the book to cover up his involvement and repair his public image. By the way, Harpending’s book is available online and is quite an interesting, although somewhat boastful, read. I scanned the chapters before he told the story of the hoax just to get a background of his life to that point. He wasn’t necessarily thought of as such an upstanding citizen by some. John P. Young, in his book “San Francisco: A History of the Pacific Coast Metropolis” calls Harpending a “scamp” (Harpending had previously been involved in a scheme to convince California to secede and join the Confederacy).

GreatDiamondHoaxBookPhilip Arnold was found in Kentucky, arrested and charged, but Kentucky refused to extradite him to California for trial. He was able to negotiate (yet again!) a deal whereby he paid back half of the money in exchange for dropped charges. He decided to open his own bank with the money left over, but was shot by a jealous rival and died from the wound. John Slack, mysteriously, was never found.